Video shot by pro-life activists on the scene at the Florida Women’s Center abortion facility in Jacksonville, shows dramatic footage of a sobbing abortion patient being loaded into an awaiting ambulance while the injured patient’s friend stood nearby crying and distraught.

The incident occurred on September 4, 2014, at an abortion clinic owned and operated by abortionist Patrick J. Kelly. Just five weeks before, state inspectors cited him — ironically — for failing to provide his staff with adequate training in medical emergencies.

“Given the demeanor of everyone in that video, that patient’s injuries appeared to be quite serious. We don’t know just how serious or if she even survived,” said Troy Newman, President of Operation Rescue. “Every medical emergency we are able to document represents dozens more that happen outside the presence of pro-life activists. Whatever happened to the woman in the video, has probably happened to others.”

Kelly owns, operates, and acts as the administrator for the Florida Women’s Center according to three deficiency reports obtained by Operation Rescue. The reports were based on facility inspections that took place between April 10, 2009, and July 29, 2014.

In fact, Kelly was cited in all three deficiency reports for failing to provide adequate training for his staff in the areas of safety, infection control, and incident reporting.

During a 2011 inspection, Kelly made absurd excuses for not properly training his staff in incident reporting procedures, raising questions about whether incidents were ever reported.

“Physician revealed that the facility has not had any incidents to report therefore there was no need for staff training,” an inspector noted.

During a 2014 inspection, Kelly insisted that his staff was trained, but could produce no evidence to substant 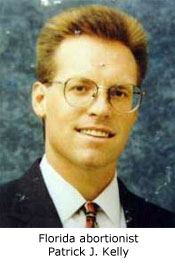 Allison Aranda, an attorney with Life Legal Defense Foundation, which works closely with Operation Rescue reports she attempted to obtain the public records of the 911 call in order to learn more about September’s medical emergency. However, her request was not met by authorities, who told her that all the records for that day had somehow been erased.

Aranda told Operation Rescue that Life Legal Defense Foundation will be filing a complaint against Kelly with the Florida Board of Medicine.

“Kelly is a shoddy provider that has been fined and repeatedly has refused to adequately train his staff. Perhaps that contributed to emergency hospitalization of patient in September. In any case, traditional discipline appears to have little effect on him. We can only expect more incident like this until Kelly is banished from the practice of medicine for good,” said Newman.