Mandy Gittler has something to hide. On July 20, 2012, she reported to work as usual at a Chicago Planned Parenthood abortion clinic. But what happened next was anything but routine.

That day, Gittler fatally botched a second trimester abortion on a young African-American woman named Tonya Reaves. While Reaves’ life ebbed away, Gittler delayed her transport to the hospital for 5½ hours. By then it was too late. Reaves died from internal injuries that had been inflicted upon her by Gittler during two consecutive incomplete abortion procedures that ruptured her uterus and caused internal hemorrhaging.

Reaves’ family sued and on January 24, 2014, they settled their malpractice case with Gittler’s employer, Planned Parenthood of Illinois, for the significant amount of $2 million, most of which will be paid to Reaves’ surviving young son, Alvin Jones, III, throughout his life.

That incident is certainly not the kind of thing that an abortionist wants on his or her resume.

It appeared that her professional career had survived the Reaves abortion/death scandal and was moving on as a “circuit-riding” abortionist.

Then on September 3, 2014, Gittler submitted an application to obtain a medical license in Indiana, which was granted on November 7.

When Operation Rescue received a copy of Gittler’s Indiana application, one answer jumped out. 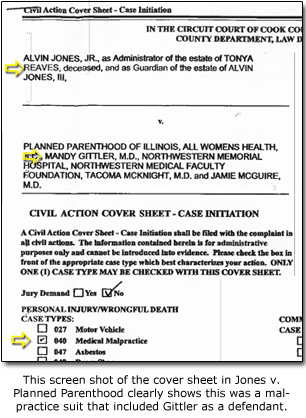 Next to a question that asked whether she had ever had a malpractice judgment against her or settled any malpractice action, Gittler had marked the box indicating “no.”

There was no mention of Tonya Reaves, her tragic and avoidable death, or the malpractice suit that clearly named Gittler as a defendant – and not a word about the $2 million settlement for her fatal acts that “deviated from the standard of care.”

Last week, Operation Rescue filed a complaint against Gittler with the Indiana Attorney General for violations of the Indiana Administrative Code, which states regarding license applications, “All information on the application shall be submitted under oath or affirmation, subject to the penalties for perjury.”

It is clear from the documentation Operation Rescue included with its complaint that Gittler was the primary person responsible for Reaves’ death and that Planned Parenthood agreed to pay because there was simply no defense for Gittler’s negligence.

Operation Rescue’s complaint narrative connects the dots from one court document to another and discusses a letter from the plaintiff’s expert witness that places the blame for Reaves’ death squarely on Gittler’s shoulders.

Filed with the Jones v. Planned Parenthood complaint documents, a redacted medical opinion dated September 28, 2012, can be found. . . That letter is purportedly written by a physician who is board certified in Obstetrics/Gynecology who is familiar with abortion procedures.

The letter notes that Mandy Gittler performed a dilation and evacuation abortion on Tonya Reaves on July 20, 2012, at a Planned Parenthood of Illinois office without the use of ultrasound guidance. After the procedure, Reaves experienced excessive bleeding and another dilation and evacuation procedure was performed by Gittler. The reviewing physician stated that Gittler “did not timely recognize that the patient needed to be transferred to a hospital for care and treatment, which resulted in a delay in her receiving care and treatment that she needed.” Reaves died as a result.

The letter further notes that each procedure done by Gittler and her delay in sending her patient to the hospital each represented deviations in the standard of care and concludes that if the deviations had not occurred, Reaves would have survived.

Gittler submitted to a sworn deposition in Jones v. Planned Parenthood on August 22, 2013, wherein she admits having conducted two dilation and evacuation abortion procedures on Reaves on July 20, 2012, at a Planned Parenthood of Illinois office. . . She further admits to a timeline that showed Reaves was not transported to a hospital for 5 ½ hours after Reaves’ first procedure and the onset of excessive bleeding.

It was soon after Gittler’s deposition, in which she shamelessly attempted to blame Reaves’ death on a non-existent uterine deformity, that her employer, Planned Parenthood of Illinios, settled the malpractice suit. Gittler left them with nothing to defend. Her negligence was obvious.

“It is our position that Gittler intentionally concealed information about Reaves’ death and the ensuing malpractice suit and settlement from the Medical Licensing Board of Indiana,” said Troy Newman, President of Operation Rescue. “We are asking for her medical license to be rescinded or revoked because deception was used to obtain it.”

If the Indiana Attorney General’s office finds that Gittler committed perjury, she could be criminally charged.

“We cannot stand idly by while Gittler acts like Tonya Reaves’ death never happened. It was extremely disappointing when the Illinois medical board decided to place the lives of other women at risk by excusing Gittler of responsibility for taking Tonya’s life,” said Newman. “If Indiana decides to act, it won’t be perfect justice, but it will be something. Tonya deserves at least that.”

Read the Complaint Narrative, with links to documentation.