Federal Court Judge Timothy Black, who formally served on the Board of Directors of Planned Parenthood in Cincinnati, has been appointed to hear a suit brought by that same abortion facility challenging Ohio’s law that requires abortion clinic to maintain hospital transfer agreements.

“We are calling on Judge Black to recuse himself from this case because of his prior involvement as a Planned Parenthood board member and president. It is wrong for him to sit in judgment of a case brought by an organization with which he has been so deeply involved,” said Operation Rescue President Troy Newman.

Planned Parenthood had previously been operating under an exemption to the law in the form of a variance to the hospital transfer agreement provision. However, the Department of Health did not approved its variance renewal application filed in May 2014, that named two doctors with long histories of malpractice and other problems as the physicians responsible to treat Planned Parenthood’s abortion patients that suffered abortion complications requiring hospitalization. The request for variance was amended on July 30 by Planned Parenthood to replace a third physician. 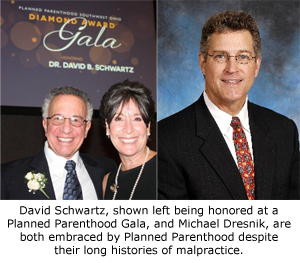 Schwartz was honored just days ago at a November 1, 2014, Planned Parenthood Gala as its Diamond Award winner. However, Schwartz has a shocking history of numerous negligence and malpractice cases dating back years, documentation of which is available on AbortionDocs.org. Injuries to women listed in the cases included botched delivery that resulted in an emergency hysterectomy to save the patient’s life.

Draznik’s background is even worse. His malpractice cases involve several botched laparoscopic surgeries that perforated other internal organs resulting in life-threatening conditions to his patients. One woman “crashed” as the result of an undetected bowl perforation and nearly died.

“Reading over Schwartz and Draznik’s extensive malpractice and criminal documents, it is obvious that the Ohio Department of Health was exercising good judgment in rejecting Planned Parenthood’s variance request and ordering them to comply with state licensing requirements as written,” said Newman. “This lawsuit is a desperate measure to keep their income cash cow open and aborting, without respect to the health and safety of women they purport to serve, who are left in the lurch should abortion complications arise. This case is just too important to allow a Planned Parenthood crony to sit in judgment. We demand Judge Black’s recusal and urge the appointment of a judge that can rule fairly and without bias.”

Operation Rescue urges the public to contact Judge Black’s office and respectfully leave a message for him through his courtroom deputy demanding his recusal from Planned Parenthood v. Hodges in the interest of justice.