Just when you thought feminists couldn’t get any more insular, myopic and just plain silly; pills and gripes are the new stars and stripes.

On the eve of Veterans’ Day, Pulitzer Prize-winning columnist and senator’s wife Connie Schultz tweeted a “Flag of Reproductive Freedom” to her 11,000 followers. In place of the stars signifying the 50 states, the flag boasted 28 buttons representing a month of birth control pills. NARAL also tweeted the “art.”

“Love this!” NARAL Pro-Choice America gushed in a retweet of the flag.

Schultz’s tweet came after a recent column she wrote in response to the midterm elections. In it, she detailed the background of the flag, “a favorite piece of artwork that hangs in a prominent place in our home.”  Well, there’s no accounting for taste. 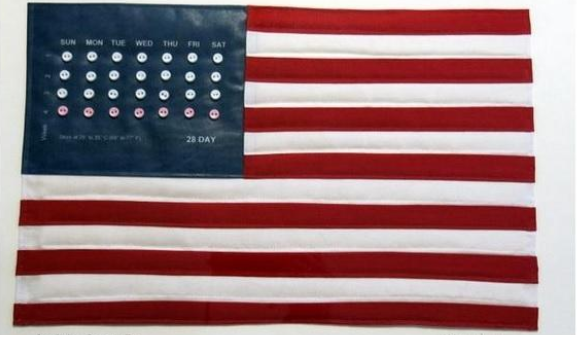 Created by Cleveland artist Dawn Hanson, the flag is “patriotism with a punch,” wrote Schultz. She described the artwork as “part quilt, part craft and wholly political” and stressed:

Instead of 50 stars, there are four rows of tiny buttons. The first three rows — weeks one through three — are white; in the last row — week four — the buttons are pink. The days of the week run along the top: SUN, MON, TUE — you get the idea.

Hanson, a Planned Parenthood donor and volunteer, presented her first “Reproductive Freedom” flag to Planned Parenthood President Cecile Richards. She created the flag as a response to America “limiting not just abortion but women’s access to basic human rights like birth control.”

“As long as this country continues to act as if family planning is only a women’s issue,” Schultz concluded, “we’re going to need a lot more women getting in the way of legislators, most of them male, who think our bodies are their business.”

“I can’t stand looking at my reflection in the glass over that flag and seeing the face of surrender,” she added. Free contraceptives for all! Keep up the fight, sister!