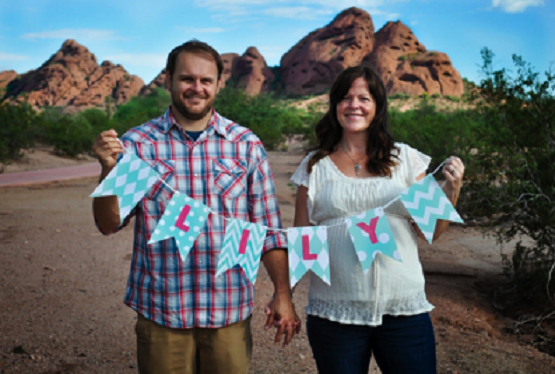 Tragically, most children with anencephaly die shortly after birth. The condition is described as a severe form of spina bifida where a failure of fusion of the neural rube in early pregnancy results in the baby developing without cerebral hemispheres, including the neocortex.

However, what’s worse than the condition is the startling fact that 95% of unborn babies who are diagnosed with anencephaly before birth die from abortion.

Earlier this year, Kellie and Jason were very excited to find out they were expecting their second child. Their son, Ted, would have someone to play with and they would have the daughter they always wanted. But when Kellie went in for her 18-week routine ultrasound she found out something was terribly wrong with her baby.

In her blog post, Love May Cost Us Dearly, Kellie shares more of their story:

I am a glass half-full kind of person. My husband, a bit of a worrier, often has a glass half-empty perception. He immediately felt something was wrong when the physician came in. She said she needed to discuss something with us.

She said a lot of words I wasn’t really following. All I could think about was seeing that sweet little beating heart. She showed us a picture of the baby’s head and started typing…

And I gasped and said, Oh no…I could hardly breathe.

She typed the rest of the word…

I had just recently learned this word because a woman from my church just experienced the same thing.

Without even looking at Jason, his head was buried in his hands, I asked her to tell us if it was a boy or a girl. She moved the doppler around and finally… Instead of tears of joy, it was sobs of sorrow. God had finally given me a baby girl that my heart has always longed for, but I don’t get to keep her.

For those of you that do not know, Anencephaly is a neural tubal defect where the baby is missing part of its brain and skull. Our baby will not survive outside of the womb. She is very much alive inside of me, but once she is born she will most likely only live a few hours.

My greatest fear has always been not being able to get pregnant.

My second greatest fear was having a miscarriage.

We drove home in silence, tears, disbelief. I have never felt such heartache as this.

My heart has ached for every friend or stranger that has suffered losing a child. I’ve had friends lose babies through miscarriage, illness, pre-term labor. I have a dear friend who cannot have children and my heartaches for all of them.

I asked Jason if he understood what was happening. He said yes, but he didn’t know why it was happening to us. I think it’s a question that will haunt us the rest of our lives.

I laid down on our bed and Jason laid next to me. We couldn’t really talk, we just laid there and cried. Jason went to go get Ted and I just stayed there laying by myself.

In that time alone, I wept. I begged God to not make me go through this. I didn’t want to tell anyone because that meant it was really happening.

I finally mustered up the strength to call my mom and sister. They were the only two I knew I could talk to. Through their tears they said all the right things. They joined me in mourning, they comforted me and told me I was stronger than I felt.

Kellie and Jason are expecting their daughter to arrive any day now but have spent the last few months preparing to meet her. They’ve given her the name Lily and are praying for a miracle.

Kellie explains why they never considered abortion in a blog post on June 11. She said, “Many people might wonder why go through this? Why put ourselves through the next 20 weeks knowing our daughter’s most likely fate? Some have said how brave and courageous we are to go on. But the truth is…Jason and I made this choice well before I even became pregnant. We made this decision when we took a vow before God and 250 witnesses that we would lovingly accept children. All children. Any child. No matter what.”

She continues, “It’s not hard for me to choose her life. It’s not hard for me to choose to love her. It’s hard to think about letting go of her. But, would it make it any easier to let go of her now? If anything I think it would be more pain, more sorrow, more grief. What parent wouldn’t want five more months with their child? What parent wouldn’t hold on to every last ounce of hope for a miracle?”

“Our little Lily, despite her diagnosis, is strong. She lets me know every day that she is a fighter. I started to really feel Ted around 19 weeks. Every night when I would lay down to sleep the somersaults would begin. I loved every second of it. Lily is no different. If anything, she has an even stronger will. I feel her move and kick all day long at 20 weeks. At 20 weeks, her kicks are so strong Jason can feel her. We are beyond thankful for that gift…a gift we would have missed if we did not choose her life. I couldn’t imagine giving that up for anything in the world. She is ours forever even though she will only be with us here a short time.”

The couple plans to cherish every minute they have with their daughter and have asked others to join in prayer for Lily. Kellie concluded, “She is our miracle no matter how long we get with her…whether 5 minutes, 5 hours or 50 years. She is a miracle, created in God’s own image and likeness. She is a miracle. She is my miracle.”

Please take some time today to pray for this family and their priceless daughter.