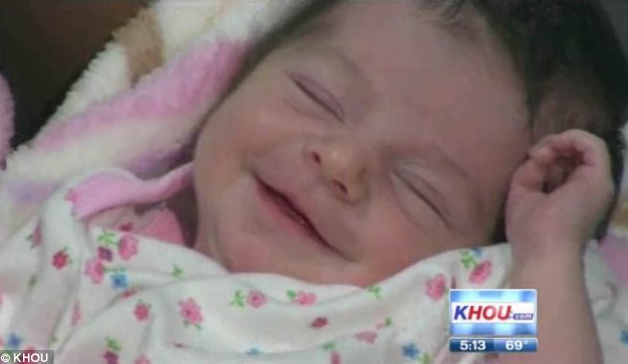 In February 2013, a child known as Baby Chloe was abandoned outside an apartment complex in Texas. She was left to die inside a Walmart plastic bag; however, a dog walker found her shortly after she was abandoned. The baby was discovered by a woman walking her dogs in northwest Harris County when the animals became interested in a Wal-Mart bag on the perimeter of the Stonegate Villas Apartments. About 3 inches of the child’s umbilical cord was still attached.

She was a distinct infant – born with one bottom tooth – who weighed 4 pounds and 12 ounces. Medical officials determined that she was a late preterm baby delivered at 36 to 37 weeks’ gestation. She was named Chloe by the Texas Children’s Hospital staff.

“She was perfectly healthy,” Olguin said. “No injuries, no health issues. No hypothermia. She was out there in February. She didn’t suffer any consequences from being left out in the elements.”

Despite releasing sketches depicting what the biological mother and father might look like and offering a rare opportunity for the media to photograph an abandoned child, officials have been unable to locate Chloe’s parents. When the pictures were released, CPS received calls from across the United States and abroad.

A few people were tested for a DNA match to the child, “but we didn’t come up with any leads,” Olguin said.”

Now, Chloe’s in foster care and her foster parents are planning to adopt her. The authorities have been unable to locate her biological parents and their parental rights have been terminated.

Amazingly, in the video below Chloe is all smiles despite her rough start in the world.