On September 21st, after a normal pregnancy, Becky Simpson delivered her daughter, Isla Simpson. However, when Isla was born she was not breathing or moving and her heart was not beating. The nurses at Burnley General Hospital in Lancashire immediately started giving her CPR. 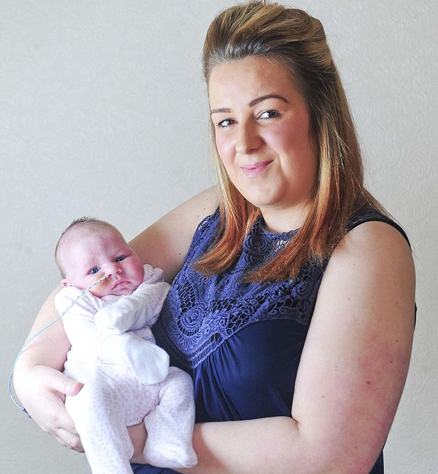 Simpson shared her story with the Daily Mail. She said, “They pulled the emergency cord and suddenly about 20 or 30 people were in the ward.I was watching them give her CPR and it was terrifying. It went on for 20 minutes, at which point they usually stop, but they kept going and luckily her heartbeat came back. I saw her a few hours after the birth and it was heart-breaking because she was sedated and still really struggling to breathe.

She looked blue and her organs were starting to die from the lack of oxygen.

The doctors thought she wasn’t going to survive and that whole week was the hardest of my life. Every day we were told to prepare ourselves for the worst.”

Doctor’s couldn’t explain why Isla’s heart stopped beating, but the medical staff did everything in their power to ensure her survival. Miraculously, after 26 minutes of CPR, Isla’s heart started beating again.

Following Isla’s resuscitation, she spent a week in the neonatal intensive care unit; but after the week was over, she was breathing without the help of a ventilator. Angela O’Toole, a midwife at the hospital, said, “All the staff used their expertise and professionalism in ensuring Isla had safe, personal and effective care. The staff supported Becky through a difficult time and we are overwhelmed that she has taken the opportunity to publicise this. Everyone in the unit will miss Becky and Isla, but it’s obviously brilliant that they are able to go home as a family and we wish them all the best for the future.”

Although Isla does have some brain damage and doctors think she might have cerebral palsy, her mom is thankful she’s alive. After a month in the hospital, baby Isla is home with her mom. Simpson concluded, ” I think she can still have a very good life. We’ll try and do as much as we can for her by taking her to all sorts of different classes and not just sit her in front of the telly. When she’s awake she’s very alert and reacts when I talk to her. She’s here and that’s the main thing.”