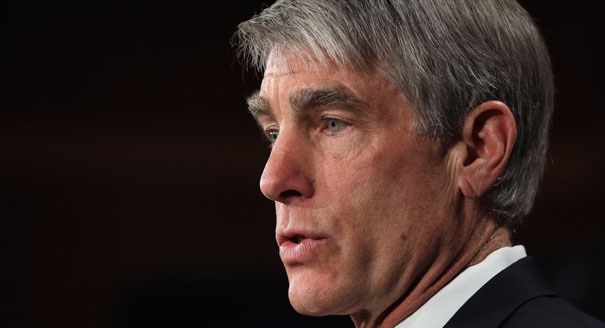 Colorado Sen. Mark Udall voted for abortion almost 80 times during his tenure in the Senate, including voting against a bill to ban gruesome partial-birth abortions.

During a debate in Denver last night, Udall defended his support for late-term abortions.

A moderator Udall the following question: “We know that you support a woman’s right to choose, but given the advances in scientific understanding of fetal development, where pregnant mothers know at which week babies grow fingernails and can swallow, would you support a ban on late-term abortions and if so at what week?”

Udall attempted to defend his pro-abortion position by saying a woman eight months pregnant has the right to an abortion in a case where her baby may have severe disabilities. He didn’t say he supports any limits on late-term abortions,

“To demand that that woman carry that child to term would be a form of government intervention that none of us want to see happen. We ought to respect the women of Colorado and their point of view,” Udall said.

Udall’s response follows on the heels of an interview in which he defended his position on partial-birth abortions. As TownHall reports:

Currently women in Colorado can choose to have an elective abortion up to six months into their pregnancy. The age of viability for a baby inside the womb can be as early as five months. Back in 2000, Udall voted against a federal partial birth abortion ban. In a recent interview with Fox 31’s Eli Stokols, Udall defended his vote and argued Roe v. Wade backs the extreme position that partial birth abortion should be legal. He implied that because partial birth abortions are “very seldom,” restrictions aren’t necessary. When Stokols specifically pressed him for his position on not only late-term abortion but also the legality of sex-selective abortion, Udall doubled down on his position.

“As you know, partial birth abortion is conducted very seldom,” he continued.

Udall faces pro-life Congressman Cory Gardner, who has the support of pro-life groups.