After LifeNews.com exposed her tenure as an intern at America’s biggest abortion business, newly-crowned Miss America Kira Kazantsev deleted her LinkedIn profile. The profile revealed that the woman representing the nation as the new Miss America interned for the very organization that has killed millions of Americans in abortions.

According to her Linked-In profile ( 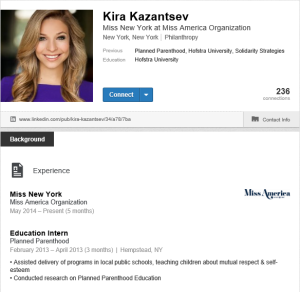 shown right), Kazantsev interned at Planned Parenthood in Hempstead, New York. Her job duties at the company that snuffs out of the lives of young baby girls? “Assisted delivery of programs in local public schools, teaching children about mutual respect & self-esteem” and “Conducted research on Planned Parenthood Education.”

Since LifeNews published our article and other news web sites and blogs picked up on it, Kazantsev has deleted her profile. The LinkedIn page now reads: “We’re sorry, but the profile you requested does not exist.”

Kazantsev is not new to abortion advocacy and her time at the Planned Parenthood abortion business was no one off in terms of supporting abortion. As an intern for the political consulting firm Solidarity Strategies, Kazantsev worked on political campaigns including that of pro-abrotion Congresswoman Annie Kuster. She’s also interned for Kirsten Gillibrand, the pro-abortion U.S. senator from New York.

Bryan Preston at Pajamas Media also noticed that Kazantsev deleted her LinkedIn profile — and he noticed she is now protecting her tweets as well.

“That’s an odd thing for someone who has a position based entirely on publicity to do,” he wrote. “She is also protecting her tweets. Possibly out of justified shame that Planned Parenthood was founded by Margaret Sanger.”

Pro-life writer Cassy Fiano commented on Kazantsev’s working at the abortion giant and she said there is likely to be a big outcry as more people become aware of her abortion advocacy.

Planned Parenthood bills itself as a “health care provider”, but they are a a dangerous and evil organization. Their abuses are seemingly neverending, as Live Action has found through our multiple investigations. They have been known to cover up rape of children in exchange for the money they receive for performing abortions.

Abuse, corruption, and law-breaking is endemic to Planned Parenthood. They have been caught sanctioning race- and sex-based abortion, as well as giving incorrect and manipulative medical counseling to young girls. They have been found to be complicit in child sex trafficking, telling the pimps that they can arrange discounts for him and that they will look the other way for girls as young as 13. They lie about the services they provide, and have been caught stealing millions from Medicaid.

And this is the organization that the new Miss America, Kira Kazantsev, is apparently proud to be associated with. She campaigned for the crown on a platform of fighting domestic violence, but apparently covering up the sexual abuse and sex trafficking of children is A-OK, as long as abortion is involved. 1 in 4 women seeking abortions are also victims of domestic violence, and are at higher risk for domestic violence in the future, but this also seemingly does not bother Kazantsev.

If Kazantsev truly wants to advocate for women and Americans, she should use her platform to speak out against abortion and the violence that it visits upon women and unborn children. Not doing so shows that all of her talk about ending violence and sexual abuse is just that — talk.