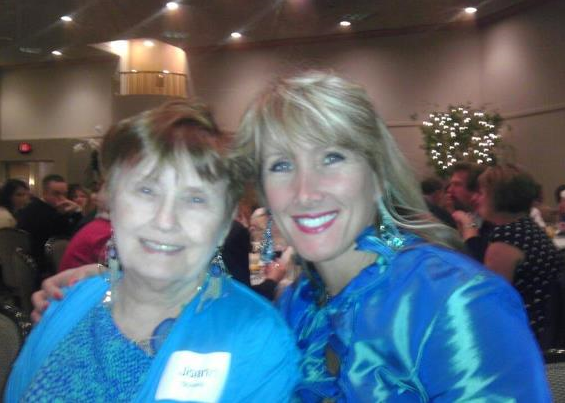 “I’m so glad I had you!”  These were the words my birthmother spoke to me last year on my birthday —  nearly 25 years after we met, 25 years after telling me it should have been her choice to abort me, 44 years after I was born, 44-1/2 years after she sought to abort me at two illegal “back-alley” abortions, and 44 years, 9 months after she was abducted and raped at knifepoint by my biological father.

It was a bittersweet day because she called not only to wish me a Happy Birthday, but also to tell me that my grandma had died early that morning.  I was born on Grandma Nina’s wedding anniversary, and she died on my birthday.  My birthmother and I spoke at length on the phone, and it was at the end of the conversation, as we were about to hang up, that she quickly called out my name a couple of times because she had just one more thing she urgently wanted to say to me on this day — “I’m so glad I had you!”

She couldn’t say to me that she was so glad she chose to have me, because that just wasn’t the case.  Years earlier she had made it quite clear that she would have aborted me had it been legal, and that it should have been her choice.  In fact, she tried to abort me twice!  She stuck to her guns on being pro-choice for 6 years — until my niece had an unplanned pregnancy with my birthmother’s first great-grandchild, and suddenly everything changed for her.  She realized how much more important life is, and she made a point of telling me.

My birthmom has been interviewed several times over the years regarding our story — by Glamour Magazine and by the syndicated television program “Extra,” in which I got to hear her tell the reporter that she’s glad she couldn’t abort me, adding:  “And now I have this wonderful daughter and the sun just shines in her.”  It was such a blessing to hear her say that!  She’s come to hear me speak at numerous pro-life fundraising banquets and I’ve had the opportunity to overhear her saying really nice things to other people and how glad she is that she couldn’t abort me.  But on my birthday last year, I had the extra-special blessing of being able to hear her say it directly to me, and it was the best birthday gift I ever received — well, besides the gift of being born and actually having a birthday to celebrate!

So many people think that a child like me must be the worst thing that’s ever happened to her — not the rape, but becoming pregnant by rape, and that I must be a “horrible reminder of the rape.”  But I’m not.  On the day her mother died, I represented hope and healing in her life.  At least she has a child to whom she is able to speak these words.  I think of the millions of women for whom changing their minds about abortion is a painful realization that they will never have this opportunity, and I grieve for them.  I grieve with them.  And then I think of those who were planned and wanted and never get to hear something so profound from their own mothers.  Even worse are the rare mothers with such wretched hearts that they would actually say to their own child, “I wish you’d been aborted.”  Instinctively, we all know how horrible it is for a mother to say such a thing.  Who on Earth would commend such a hard heart?

People often ask me how difficult it must be for me to be sharing my painful story regularly and whether I wish I didn’t know the truth of my conception and near-death experience at the hands of abortionists.  I tell them, “Not at all!”  It’s my story, and God is using it for His purposes.  Most of the time, I am speaking to people who are either very sympathetic, or whose hearts are easy to change — pro-life people who make the rape exception.  I regularly get to hear people not only say that my story changed their mind forever on this issue, but I also have the added blessing of people saying things to me that others don’t ever get to hear in everyday life — things like, “I’m so glad you were born!”  I feel spoiled that I get to hear this and others don’t, so I make a point of telling people when I wish them Happy Birthday, “I’m so glad you were born!”  I can’t tell you how many people were deeply moved, telling me “Thanx — no one has ever said that to me before.”

We need to tell one another because that’s what a birthday is — it’s celebrating the fact that you were born!  You are one of a kind — irreplaceable, designed by God for a purpose and intended to be a blessing, no matter the circumstances.  If you are a mom or a dad, don’t hesitate to tell your children how glad you are that you had them — not of your own choosing or planning, but give them the gift of knowing that there is a greater purpose to their lives, well beyond your personal intentions, and watch them soar!

LifeNews Note: Rebecca Kiessling is an international pro-life speaker, attorney, wife, mother of 5, founder and President of Save The 1, co-founder of Hope After Rape Conception, and author of the Heritage House ’76 pamphlet “Conceived in Rape:  A Story of Hope.”  Visit her website at www.rebeccakiessling.com