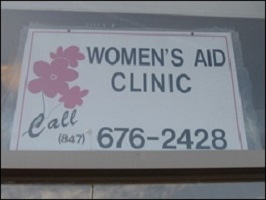 A young woman living independently of her mother for the first time gets involved in an abortion clinic without knowing it:

“I enrolled at Miami-Dade College and answered a newspaper ad seeking a receptionist at a Women’s Clinic close by the house where I was staying. I was immediately hired and began my training on how to answer the phone behind the front desk.

At the time, all I was looking for was a job and an opportunity. Being offered a position in a medical clinic was a great opportunity as it allowed me to stay in the medical field, where I hoped to continue to grow and develop.

I was not familiar with the services offered by this clinic at the time I accepted the job. I assumed with it being a women’s clinic, it implied annual gynecological exams and birth control. It wasn’t until I was hired that I discovered they also provided abortions. I was unfamiliar with the medical procedure itself as it related to abortions, but 3 years before, Roe V Wade had made abortions legal and to my impressionable young mind, legal meant that they were safe. As far as I was concerned that was really all that mattered.”

Jeanne M. Pernia, Cherisa Jerez Conquered: the Story of One Clinic’s Journey from Death to Life (2013) 15

One could think that because this happened a long time ago, women are now more aware that “women’s clinics” and “women’s centers” are likely to perform abortions. However, it doesn’t seem to strain credulity that some women end up working at abortion clinics without really knowing or thinking about it.

This young woman certainly didn’t wrestle with the dilemma of whether abortion was right or wrong. She had no real understanding of what abortion actually was like. She had never seen one.

She didn’t know the gruesome nature of many abortion procedures, the fact that after suctioning out the baby, doctors often have to sort through the fetal remains to find 2 arms, 2 legs, a head, etc., to make sure they got everything out. Even though just a room or two away, abortionists were taking apart children, she didn’t know the reality.