A British man has been jailed after a plot was discovered in which he planned to hire thugs to beat and kill his pregnant girlfriend after she refused his request to abort his baby.

Jamie Smith, 23, plotted to have his girlfriend Jessica Santos, 18, attacked. Smith came up with scheme after Miss Santos refused to abort his baby and he paid teven Blades, 23, and a third man to attack her in a remote park. The assault was planned to make Santos miscarry or kill her and, ultimately, kill the unborn child.

However, the plan backfired with the third man refused to be a party to the assault and alerted authorities. Smith has been jailed for seven years and Blades jailed for 12 months for their roles in planning the attack.

In United States, in April 2004, George W. Bush signed into law The Unborn Victims of Violence Act, which makes it a crime to harm an embryo or fetus at any stage of pregnancy during an assault on a pregnant woman. Some 31 states have similar laws in place that provide for a second crime against the assailant when an unborn baby is killed or injured in the course of an attack on his or her mother.

Smith, who was in a relationship with another girl, wanted to make the attack look like a robbery and also intended to be injured.

The knife would be used to threaten him and Mi 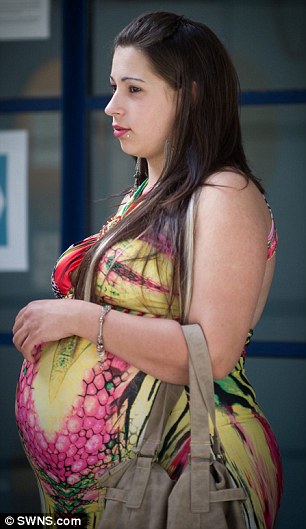 ss Santos before both were assaulted.

Smith, of Peterborough, was charged with conspiring to cause grievous bodily harm but tried to claim others had hatched the plan.

Miss Santos met Smith on Facebook where the pair started talking, before the first met shortly before Christmas last year

However he was unanimously convicted after a five-day trial at Peterborough Crown Court and jailed for seven years.

Blades, of Peterborough, admitted the same charge and was jailed for 12 months.

Both men were both given a 10 year restraining order against the victim by Judge Sean Enright.

Outside court Miss Santos – who is now eight months pregnant – said: ‘Part of me wants to believe that he was put up to this by someone, but deep down I know that is not the case.

‘It hurts a lot to know that someone I felt so close to could plan this behind my back, yet so still be so nice to my face. It’s just evil.

‘Nobody has the right to say whether someone, especially a baby, should live or die.

‘If Jamie did not want to get involved with the baby he didn’t have to and he knew this. This makes what he arranged even harder to understand.

‘When my child is old enough I will tell them about this and let them decide if they want a relationship with Jamie – until then I will do everything I need to do to protect my child.’

After the case Detective Constable Vicky Speirs said: ‘This was a sickening and extremely dangerous plot to cause a young woman to lose her unborn child.

‘It is incomprehensible how anyone would want to carry out such a hurtful and violent act.