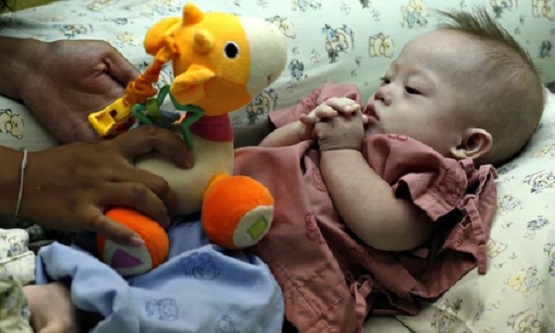 An unnamed friend of the couple who wanted a surrogate to abort their twin baby who was diagnosed with Down Syndrome has issued a statement to Australian press claiming the couple was told Gammy would die.

David and Wendy Farnell had not been seen since it emerged they abandoned Gammy in Thailand and returned to Australia with his healthy twin sister. Child protection officials had been trying

to touch base with the man and his wife since Tuesday but visits to their home in Bunbury, south of Perth, went unanswered. An investigation was launched this week into the safety and welfare of the twin sister but authorities were unable to find the family.

Officials have finally located the couple and now an unnamed friend has stepped forward on their behalf:

Here’s what a new news report has to say:

After initially denying they knew about baby Gammy, a friend of the couple issued a statement to a local Australian newspaper saying the pair only left Gammy because they were told he was likely to die.

“Gammy was very sick when he was born and the biological parents were told he would not survive and he had a day, at best, to live and to say goodbye,” the unnamed friend told the Bunbury Mail, in Western Australia, where the couple live.

The friend said the surrogate mother gave birth at a different hospital to the one agreed upon, which made the surrogacy agreement void. The couple was scared, she said, that Pattharamon would change her mind about the second child, and they’d have to leave Thailand with no children at all.

According to the report, the friend noted that the backdrop to the surrogacy row was a military coup in the country and “it was very difficult to get around.”

The takeover took place in the early hours of May 22, 2014 when Commander of the Royal Thai Army General Prayuth Chan-chua announced in a national broadcast he was now in charge.

“This has been absolutely devastating for them, they are on the edge,” the friend added, referring to the days of media scrutiny and debate over their decision, months after they returned home.

Pattharamon claimed the couple asked her to terminate the Down Syndrome child when she was seven months pregnant.
Not true, the couple’s friend said.

After the babies’ birth, Pattharamon claimed they bought nappies and milk for the baby girl, but “didn’t even look at the boy.” Also a lie, the friend added.

Meanwhile, the Thai surrogate mother, Pattaramon Chanbua, says she is shocked to hear that David Farnell had been convicted previously on child sexual abuse charges. David and Wendy Farnell were married in 2004 in Jianjiang and they met through a matchmaking agency after Farnell’s first marriage ended. He was jailed in late 1990s for sexually molesting two girls under age of 10 and, in 1998, he was charged with six counts of indecently dealing with a child under the age of 13 and was convicted and sentenced again.

New reports also indicate Chanbua herself worked as a booking agent for a surrogacy agency. She has been praised for her decision to keep now seven-month-old Gammy, after she claimed the Down syndrome infant boy had been abandoned by his Australian biological parents.

But, police are already investigating her role as birth mother in the scandal and Thai Health Ministry general secretary Samphan Komrit said yesterday: “If it is found she is involved (as an agent) that will be investigated.”

As LifeNews reported, child protection officers reached the Australian couple after trying for the past few days.

Western Australia Child Protection Minister Helen Morton told Fairfax Radio on Thursday: “We’ve had telephone contact with the family and we’re in the process of putting other arrangements in place.” She said the department had no “major” concerns at present, but would consider how to ensure the safety of the baby girl, Gammy’s sister, she said.