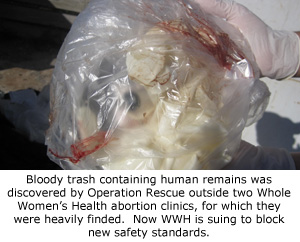 Texas abortion businesses that are in court this week challenging the constitutionality of a regulation that requires abortion facilities to meet Ambulatory Surgical Center standards, are complaining loudly about the hurdles they face in acquiring new offices that comply with the higher medical safety standards.

“Abortion mills are so used to setting up in whatever run-down building that will lease to them that now that they have to act like a legitimate medical facility, they simply cannot do it,” said Troy Newman, President of Operation Rescue. “It’s almost scandalous that they have been allowed to operate so far below safety standards all these years.”

The Ambulatory Surgical Center regulation is part of HB2, an abortion reform law passed during a contentious special legislative session last year. Already half of Texas’ 41 abortion facilities in operation last year have closed. Once the new facility standards go into effect on September 1, all but six remaining abortion centers in Texas are expected to close.

Amy Hagstrom-Miller testified yesterday about the closure of four out of five of her Whole Women’s Health facilities. She told the court that she could not find an office for her Austin abortion business and was forced to shut it down. She said that all the offices that would meet the ASC standards were too expensive. One facility that she could afford was turned down for financing by 15 banks. Another facility she tried to lease had a covenant restriction that did not allow abortions to be done on the property.

Newman further explained, “We don’t lower standards for other businesses when regulations become difficult. If abortion businesses want to keep operating, they need to follow the laws just like any other business. This has nothing to do with the state creating an undue burden. Abortion businesses are the ones responsible for creating a negative business climate with their own bad behavior and years unaccountability.”

Miller also described the inspections by the Department of State Health Services, which found deficiencies at Whole Women’s Health facilities as “aggressive” and “adversarial,” which made her staff feel “uncomfortable.”

“Do we really want to lower medical standards because meeting them is expensive or because oversight makes abortion workers uncomfortable? It’s frankly a ridiculous argument. Every business has to meet requirements. Restaurants must submit to regular inspections that are likely ‘uncomfortable’ for the employees and drives up costs, but it must be done in order to keep the public safe. Abortion facilities, where surgical procedures are done, cannot be exempt from safety standards because it is difficult or uncomfortable. If they have to close for the public’s safety, then so be it.”

Also testifying was abortionist Sherwood C. Lynn, Jr., who now works at Whole Women’s Health in San Antonio. Lynn complained about being denied hospital privileges in the Rio Grande Valley and Austin despite his 35-year career as an abortionist for what he said out of “fear of retribution.”

However, Operation Rescue’s 2010 investigation uncovered that Whole Women’s Health facilities where Lynn was employed had engaged in the illegal dumping of private patient medical information and biohazardous medical waste, which later resulted in heavy fines. The Texas Medical Board scheduled Lynn for disciplinary hearings in 2012 based on Operation Rescue’s complaints, but the cases against Lynn and six others were quietly dismissed under mysterious circumstances after months of hearing delays.

“Abortionists pose additional liabilities to hospitals, which don’t want their reputations damaged by abortionists who many have engaged in questionable conduct,” said Newman. “Again, this is a matter of Lynn shifting the blame onto the hospital for a situation he created with his own poor decisions.”

Protesters from both pro-life and abortion groups have been outside the courthouse in Austin this week both in support and in opposition to the Texas safety law. The trial is expected to continue through the end of the week.