The University of Chicago has published what amounts to a how-to guide on getting an abortion, complete with referrals to local abortion providers, links to financial assistance programs and statements that it’s one of the “safest” procedures in America today.

The guide also tacitly warns readers not to trust crisis pregnancy centers, citing an 8-year-old study commissioned by a top Democratic lawmaker that claims the vast majority of centers provide false or misleading information that could “lead to suicide and ‘post-abortion stress disorder.’”

Its launch has come under fire by some Illinois pro-life groups. A campus official told The College Fix that while the guide is hosted by the university, it’s not meant for students. Titled “Accessing Abortion in Illinois,” the guide launched on June 6 as a project of the Section of Family Planning and Contraceptive Research, the Center for Interdisciplinary Inquiry and Innovation in Sexual and Reproductive Health (Ci3), and the Urban Initiative of the National Institute for Reproductive Health.

While the university says it’s a guide for health and social service providers, the information is just as informative for students, providing links to multiple abortion providers in Illinois.

Area pro-life groups are upset with the university’s decision to collaborate on such a project. 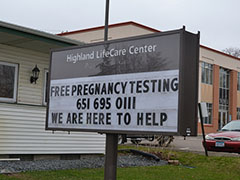 The guide says crisis pregnancy centers can cause “confusion” just by existing, and that going to such a place “can lead to delays in care for an individual who wants to consider abortion.” It cites a 2006 study commissioned by Rep. Henry Waxman, Democrat of California – at the time ranking member on the House Oversight Committee – that said such centers provide “false and misleading health information” about abortion.

A spokesperson for the university told The College Fix that the guide is not intended for patients, but rather for health and social service providers. Pregnant students, he said, would go to the university’s health center.

The spokesperson also said that despite the guide being hosted on the university’s website and using its logo, it’s actually a Ci3 project.

Lee Hasselbacher, policy coordinator for the Section of Family Planning and Contraceptive Research, told The College Fix the guide’s discussion of crisis pregnancy centers “is focused on assisting health and social service providers in offering referrals to abortion providers once a woman has already opted to seek abortion.” The guide includes resources that providers could find useful in “providing unbiased, non-directive all-options counseling,” but that list “was meant as a starting point,” Hasselbacher said.

Asked what other resources the university makes available to pregnant students, such as adoption services, the university forwarded links to how a student could acquire birth control or emergency contraception.

Jack Nuelle, an executive board member for University of Chicago Students for Life, told The College Fix he does not believe a page presenting life-affirming options for students exists.

Nuelle said the university should clearly outline the options available to pregnant students so they are aware of options other than abortion.

A search of the university’s website for pregnancy resources produces scant results. There are no links to various crisis pregnancy centers in the area, such as the Southside Pregnancy Center in Oak Lawn or Aid for Women, which has locations across Chicago.

The top result is a “fact sheet” produced by the university’s family planning department, which criticizes pregnancy resource centers as being deceptive, misleading and providing inaccurate information.

The University of Chicago is also the only known university in the U.S. to perform abortions on campus.

In February 2013, Campus Reform reported that the university’s Ryan Center was performing abortions on campus. It’s not known how many abortions the Center performs each year.