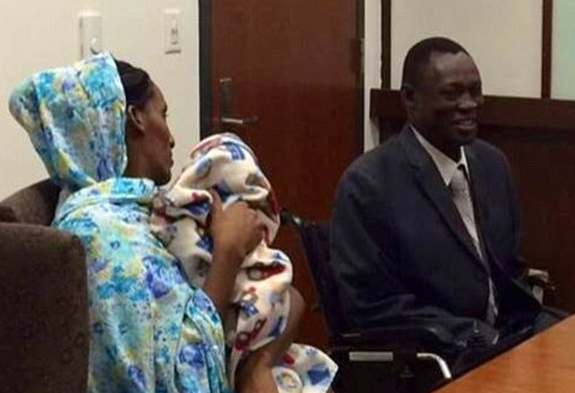 Meriam Ibrahim, the Sudanese Christian woman who was recently released from prison after facing the death penalty,and her family are reportedly safe at a “makeshift home” in at U.S. embassy in Sudan.

At eight months pregnant, Ibrahim had been sentenced to death for not renouncing her Christian faith and she was imprisoned and eventually forced to give birth while shackled in the Omdurman Federal Women’s Prison in North Khartoum, Sudan.

Ibrahim and her husband were released from the police station after being questioned, and they are being forced to stay in Sudan. Now, reports indicate they are holed up in the U.S. Embassy, which is regarded as American soil.

Meriam, 27, a doctor, spoke to Italian journalist and activist Antonella Napoli who visited her and her family in the library of the US embassy in the capital Khartoum which has become their makeshift home while they wait to leave Sudan.

Four camp beds have been put down in the floor and the family are being attended to by embassy staff in the cramped building.

Writing exclusively for MailOnline, Miss Napoli said that Meriam and Daniel wanted to thank the public for all their support which played a huge part in getting her out of jail.

Miss Napoli wrote: ‘Meriam knows that her and her family will be safe only when they will be very far from away from Sudan’.

Miss Napoli is one of the few journalists to speak to Meriam in person since she was freed on June 30 after spending eight months behind bars in a women’s prison in Khartoum.

Napoli said that on her visit she found Meriam in ‘good physical and mental condition, although she’s naturally been tested by this experience’.
She describes Meriam as a ‘shy girl, slight in build with perfect skin, like porcelain’ who does not speak English so Daniel, a biochemist, translates.Miss Napoli writes: ‘When I started to talk to her she was keeping her eyes down.Click here to sign up for daily pro-life news alerts from LifeNews.com

‘It was difficult for her to meet my gaze. Her hands were folded in her lap as if to protect herself. Her experience in the prison was shocking.

‘She knows that her and her family will be safe only when they will be very far from away from Sudan.’

Miss Napoli describes the room where the family are staying as ‘full of shelves and books’ with a large plasma screen TV to keep them entertained.

Representative Randy Hultgren today continues to push for Meriam’s release and for the Sudanese government to allow her to return to the United States.

“As someone with deeply-held religious convictions, I believe that everyone has the fundamental right to profess their faith and practice their religion wherever in the world they may live. As Miriam Ibrahim remains safe but in legal limbo at the U.S. Embassy in Sudan, it is imperative we maintain vigilance in protecting religious freedom abroad,” said Rep. Hultgren. “By nature, every human being is given certain rights, including the fundamental right of belief, which no government can justly attack. It is in the common interest of humankind to defend those persecuted for expressing their beliefs and practicing their religion.”

Meriam has been concerned that her newborn daughter Mara may be unable to walk and the Daily Mail indicates Ibrahim said that two-month-old Maya will undergo an ultrasound in the coming weeks to confirm that she will be able to walk.