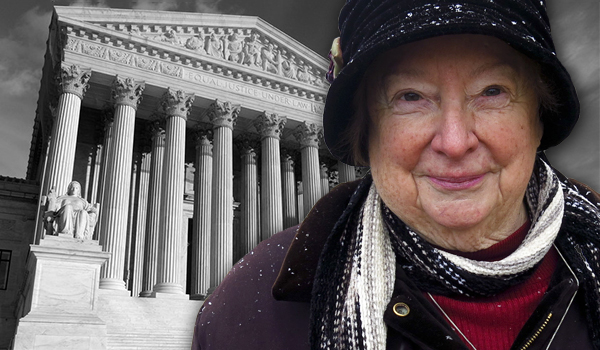 Yesterday morning, in a unanimous decision by the U.S. Supreme Court that struck down a Massachusetts “buffer zone” law, sidewalk counselor Eleanor McCullen won the right to speak up freely to women entering abortion centers in Massachusetts.

The 77 year-old grandmother recently gave a revealing interview to NPR.

“I go where the Holy Spirit leads me,” she said. “It’s America and I should be able to walk and talk gently, lovingly, anywhere, with anybody.”

Outside the Supreme Court earlier this year – where Bound4LIFE gathers twice weekly to pray for the ending of abortion – McCullen shared words of truth with whomever would listen: “The poorest of the poor is the child in the womb […] Today the womb is the most unsafe place to be for a child.”

McCullen was represented by the nonprofit legal group Alliance Defending Freedom. Their lead counsel on this case Mark Rienzi noted, “Americans have the freedom to talk to whomever they please on public sidewalks. That includes peaceful pro-lifers like Eleanor McCullen, who just wants to offer information and help to women who would like it.”

The ruling in the case McCullen v. Coakley affirms that public sidewalks are a public forum for open discussion. Forcing sidewalk counselors to keep to a 35-foot “buffer zone” from the door of abortion centers is obstructing their free speech; thus, the Massachusetts law was struck down.

The majority opinion, written by Chief Justice John Roberts and joined by Justices Ruth Bader Ginsburg, Stephen Breyer, Sonia Sotomayor and Elena Kagan, notes that buffer zones for election polling places (which restrict candidate signs or distribution of election materials) are Constitutional because “voter intimidation and election fraud [… ] are difficult to detect.” Even though the sidewalk counselors activity was viewed as different, the majority disputed that the law discriminated against pro-life views.

However, Justice Antonin Scalia wrote a concurring opinion, joined by Justices Anthony Kennedy and Clarence Thomas, noting they saw “persuasive evidence that the [Massachusetts] law is content-based.” This opinion, along with a separate one from Justice Samuel Alito, contended that the law discriminated specifically against pro-life free speech.

Mark Rienzi, the lawyer who argued successfully for pro-lifers before the nine justices, concludes: “The Supreme Court has affirmed a critical freedom that has been an essential part of American life since the nation’s founding.”

As originally reported by NBC News, the court case “casts a legal cloud over similar provisions in 15 other states.”

We are thankful that our right to free speech, specifically outside abortion centers, has been upheld by the highest court in our land. Please continue to pray with us for sidewalk counselors like Eleanor McCullen, for strength in their work and wisdom as they lovingly speak truth to those in difficult circumstances, and for the Supreme Court of the United States to continue to uphold the constitution and protect religious freedom in this nation.