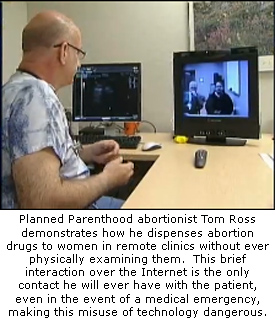 Polk County Judge Jeffery Farrell is currently considering a suit brought by Planned Parenthood of the Heartland against the Iowa Board of Medicine for new rules that ban the webcam abortion system of dispensing abortion pills that was developed in Iowa. A ruling is expected soon.

The two parties appeared in court earlier this week to debate whether the Iowa Board of Medicine acted properly in adopting the new regulations last August.

Planned Parenthood argued in court that the Board’s decision was “flawed” and “politically motivated.” It noted that 5,000 abortion have been done using the webcam system, but failed to mention that it does not track complications of women who must find their own way to emergency rooms when things go wrong.

Planned Parenthood also insisted that Board member Fr. Frank Bognanno, a Catholic priest who was appointed by pro-life Gov. Terry Branstad, should have recused himself from the vote. However, the Attorney General’s office, which defended the regulations, noted that procedures allow for a party to ask for recusals ahead of Board votes, which Planned Parenthood never did.

While Planned Parenthood argued that the regulations would create a hardship on “rural” women, forcing them to drive “hundreds of miles” to get abortions, the Attorney General’s office countered that Planned Parenthood never stated exactly how many miles women might have to actually drive.

All of Planned Parenthood webcam site have been located in or very near metropolitan areas with ample access to legitimate health care, making the “undue burden” argument spurious.

Planned Parenthood once operated their webcam abortion pill scheme at 15 locations throughout Iowa, but since 2012, they have halted abortions at nine of those locations, including Storm Lake, Knoxville, Newton, Ankeny, Spencer, Creston, Red Oak, West Health Center in Urbandale, and the Susan Knapp Health Center located near Drake University in Des Moines.

The Attorney General’s office also noted that currently 17 states ban webcam abortions and none of those state laws have been found unconstitutional.

Webcam, or telemed abortions involve the remote dispensing of abortion drugs to women at Planned Parenthood locations where the abortionist is not present. The abortionist briefly interviews the perspective abortion patient over a closed video conferencing system, then dispenses the pills at the patient’s location by clicking a button on a computer screen that releases a drawer containing the abortion drugs. Women never receive a physical examination by a licensed physician, who is also not available to the patient in the event of a complication.

“How can any of us possibly find that a medical abortion performed over the Internet is as safe as one provided by a physician in person?” asked Dr. Greg Hoversten, Chairman of the Iowa Board of Medicine at the time of the Board’s vote last August.

Operation Rescue brought the abortion pill distribution scheme to light after an undercover investigation in March, 2010, then exposed plans by Planned Parenthood Federation of America to expand the scheme into every one of their clinics nationwide. Operation Rescue worked with Iowa pro-life groups, including Iowa Right to Life, to end webcam abortions.

Since then, Planned Parenthood’s plans to conduct what would have been the largest expansion of abortion services since Roe v. Wade have failed after bans on webcam abortions were enacted in 17 states. Federal legislation was also introduced. This made Planned Parenthood affiliates in other states reluctant to invest in the required hardware for a process that could soon be outlawed in their states.

“If Judge Farrell rules that the regulations will stand, it will be the end of Planned Parenthood’s scheme to cut corners on women’s health and safety for the sake of greater profits,” said Newman. “Their plan to expand webcam abortions into all 50 states has already failed because of the diligence of pro-life groups to raise the alarm on Planned Parenthood’s exploitive practices. Abortion numbers are falling in Iowa, despite Planned Parenthood’s efforts to increase them. A favorable ruling in this case would be the cherry on top of a string of pro-life victories that are saving lives today.”