As Virginia Gov. Terry McAuliffe engages in an effort to scrap abortion clinic safety standards, two abortion facilities owned by the notorious New Jersey abortionist Steven Chase Brigham are seeking variances that would exempt them from complying with much of the law.

Virginia Women’s Wellness in Virginia Beach and Virginia Health Group, also known as American Women’s Center, in Fairfax, Virginia, admit that they are unable to comply with facility standards even though they were allowed two years to come into compliance with a 2012 emergency law that became permanent in 2013. Both have made applications to the Virginia Board of Health for variances that would exclude them from either having to make facility changes or move.

Brigham has had licenses revoked in six states and currently awaits word from the New Jersey State Board of Medical Examiners whether his last license in that state will also be revoked.

If Brigham’s facilities cannot comply by late 2014, they would be forced to close. It is believed that eleven other abortion facilities also cannot comply with the facility requirements by the time the grace period expires.

Since his election last year, Gov. McAuliffe has appointed five new members of the Health Board in an effort to pack the Board with abortion supporters that would ensure that the abortion facility safety regulations are repealed.

“Issuing a variance to abortion clinics owned by one of the most dangerous abortionists in the nation is a very bad idea, and repealing the safety standards is an even worse one,” said Operation Rescue President Troy Newman. “Brigham has a long history of flouting the law and endangering women with his seedy and deceptive business practices. If left to their own devices and without any accountability for maintaining appropriate standards, abortion facilities can only be counted on to sink to the lowest of patient care standards that places the lives and health of women at risk.”

In 2010, Brigham and his associate, abortionist Nicola Riley of Utah, came to the attention of Cecil County prosecutors in Maryland after the two seriously botched a late-term abortion on a woman who required emergency surgery to save her life. Hospital staff alerted police after the pair exhibited suspicious behavior when they hastily dropped their injured patient off at the emergency room.

Brigham and Riley were arrested and jailed on murder charges after an investigation showed that at least 35 late-term, viable babies were aborted illegally by him in Maryland, where he has never held a medical license. Because practicing medicine without a license is a crime, a Maryland law kicked in that allows for murder charges in the event a viable baby is killed during the commission of a crime.

While the criminal charges were later dropped, Riley’s Maryland medical license was revoked and revocation proceedings were initiated against Brigham in his home state of New Jersey.

Due to his deceptive and dangerous practices, Brigham was ordered to have no part in abortions businesses in Pennsylvania. In Maryland, all four of his licensed abortion facilities were ordered to close last year after authorities discovered that a patient had died and that drugs were administered incorrectly, creating a danger to the public.

Brigham also served time in prison in 1998 for billing fraud and has been in and out of court with suits filed by creditors for unpaid bills. Records indicate he was involved in bankruptcy proceedings in Connecticut in 2000. 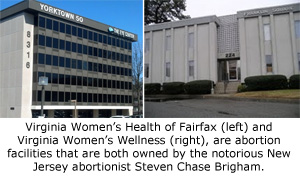 Both of Brigham’s Virginia facilities have been cited for multiple safety violations that reflect a gross disregard for their patients.

At Virginia Women’s Wellness in Virginia Beach, some of the violations include:

• Failure to disclose facility ownership.
• Failure to conduct criminal background checks on employees.
• Failure to provide patients with contact information where complaints may be filed.
• Improper handling and cleaning/sterilizing of dirty surgical equipment.
• Failure to change gloves between handling a “dirty” suction machine jar containing bloody aborted baby remains and handling a clean one.
• Four out of five recovery room recliners were noticeably dirty and broken.
• Tears were found in patient examination tables.
• Failure to properly maintain patient monitoring equipment.
• Failure to follow manufacturer’s instructions for administration of controlled substances.
• Failure to ensure that injectable drugs were mixed and labeled in accordance with regulations.
• Failure to develop a required quality assurance program.
• In 13 of 13 abortion records inspected, all patient records failed to note specific drugs administered in the local anesthetic.
• Facility failed to meet building standards.

At Virginia Heath Group in Fairfax, some of the violations include:

“Many of the violations had to do with cutting corners on women’s health, and are reminiscent of the conditions found in Kermit Gosnell’s ‘House of Horrors’ in Philadelphia,” said Newman. “Because Brigham has demonstrated an unwillingness to comply with medical standards and other laws in a number of states over the past three decades, there is no reason to think that he will ever comply with Virginia’s abortion safety regulations. Based on his horrific record of abortion abuses, we urge the Virginia State Board of Health to reject the two facilities’ requests for variances and allow them to shut down when the grace period expires later this year.”