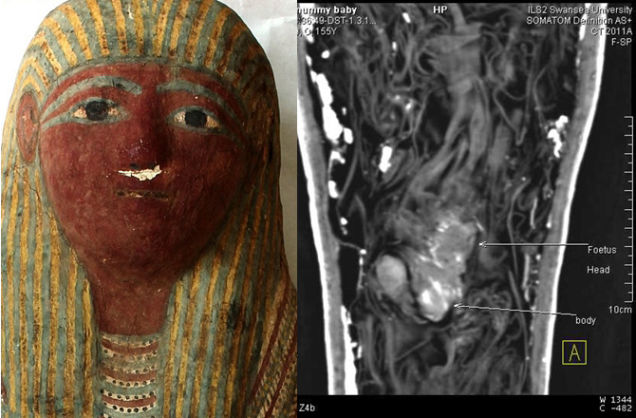 History is something that’s always intrigued me. By reading historical books, watching documentaries and visiting iconic places from the past, our eyes are opened to the life lessons of those who came before us. You may be surprised to discover that some historic findings give us striking insights that affirm the value of unborn life. Perhaps if pro-abortion activists read a few books they’d realize they’re out of sync with a world of past compassionate societies.

A mysterious Egyptian mummy had been on display in a museum in Wales. Experts were puzzled about this mummy’s tiny size and what its origins might be. Some suggested that it could have been a forgery.

Yet, researchers decided to investigate further. And what they found helped solve the mystery. After conducting a CT scan of the artifact, it revealed that the majority of the interior was filled with linen bandages. Within the folded material was a darkened object about three inches long. After identifying a fetal femur bone, it was determined the contents of the case were not a regular mummy, but an unborn baby and placental sac.

The baby was estimated to be only 12 — 16 weeks gestation. Other archeological findings in Egypt seem to corroborate that there were burial sites set aside for the unborn. The care these children were given shows that their lives had value even long before they were born. Curator, Carolyn Graves-Brown said, “We can imagine that [this] represents someone’s terrible loss; an occasion of great grief and public mourning.” This appears as a harsh contradiction to the way unborn life is willfully sacrificed upon the altar of “choice” today.

Other cultural beliefs also exist that support the unborn. An indigenous tribe in Limpopo, South Africa was studied regarding their practices surrounding pregnancy. What they found was a culture that truly respects and embraces the process of pregnancy. The first of the principles they state is that pregnancy is an honor. “Pregnancy is regarded as a sacred event that brings joy to the entire family,” the study states. It’s considered a special occasion by the immediate family and in-laws. Both are actively involved in supporting the mother throughout the pregnancy. The second principle presented is that pregnancy needs to be safeguarded. An emphasis is given to both physical and spiritual preservation of the mother’s wellbeing. Lastly, importance is shown toward the unborn infant being protected. The study is quoted, “All participants emphasized that it was important to protect the unborn child from all harmful influences.” The beliefs of the tribe include mothers being advised on what foods to eat and avoiding certain medical treatments and potentially dangerous activities. This high respect and compassionate perspective on pregnancy is something that should be universally duplicated within our culture.

Unfortunately, the legacy that we’ve left over the past several decades has been one of a downward spiral that devalues life. An example of this can be found in the Geneva Declaration. In 1948, The World Medical Association created this as a proclamation of human rights. It was a direct response to the atrocities that had been committed by the Nazis. They were coming out of a period where it had been acceptable to kill, mistreat and perform experiments on those who were thought of as inferior. Therefore, the Geneva Declaration was a means for declaring respect for human life. The oath included this clause, “I will have the utmost respect for human life, from the time of conception.” However, in 1984, it was altered to no longer acknowledge conception. Instead, they replaced it with the words, “from its beginning.” That too did not survive. In 2005, it was deleted altogether, leaving no reference to the earliest stages of life. It’s shameful how this literally documents our society’s degradation of life.

That leads us to the present. What will future generations see in the history we leave behind? The tragic reality is that we have a culture of death where 56 million babies have been slaughtered. Abortion mills thrive across the country where the unborn aren’t only killed, but abortionists profit from the killing. Pro-abortion government leaders are endorsing policies that support abortion-on-demand. And those who advocate for abortion push for it to be seen as common and acceptable. It’s dismal, but that’s not the end of the story.

We have voices that are speaking out affirming the value of life. Technology, via ultrasounds, is showing the world the beauty of development within the womb. Women help centers are located in communities across the country, reaching out to abortion-vulnerable women and saving babies’ lives. Pro-life legislation is being introduced on both federal and state levels. Much progress is being made; but make no mistake, it’s a bitter ongoing battle. It’s not enough to merely stand on the sidelines and cheer others on. For victory, we must each do our part. I pray that we may be standing at the turning point in history, where this generation will restore a culture of life.