In a shocking case of murder and infanticide Carol Coronado, 30, was arrested on suspicion of murder on Tuesday at her home in Torrance, California. She stands accused of killing her three little girls, ashed three, two and two-months old.

The woman’s mother found the three girls dead in a bed at the home with their mother Coronado beside them clutching a knife. Detectives said today several knives were recovered at a bloody scene.

The alleged murders took place while Coronado’s husband was outside mowing the lawn and the devastated father was led out by police crying: ‘She killed my daughters.”

Police have not released a motive for the killings but police officials say Coronado allegedly tried to cut her own wrists and was taken to hospital before being booked into jail. The children’s grandmother told a neighbor that her daughter had called earlier in the day and said that she was going crazy.

Deputies responded to the home in 1000 block of West 223rd Street about 5:20 p.m. and “were met by family members who told the deputies that a mother had killed her children,” Sheriff’s Department officials said in a statement.

The victims were girls who ranged in age from 2 months old to 3 years old, authorities said. They were found in the same room of the small home. 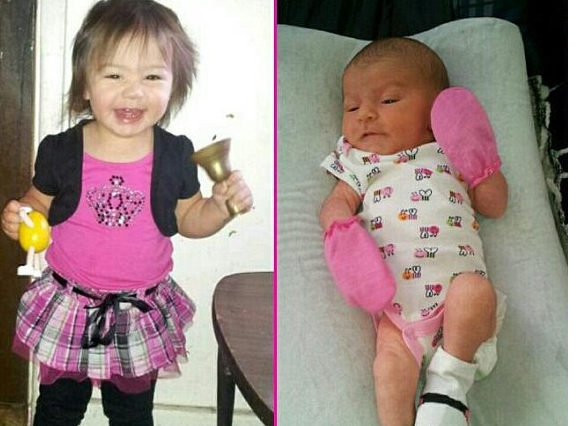 Department officials identified the mother as Carol Coronado, 30, and said she was being taken to the Carson station, where she would be booked on suspicion of murder. Authorities said a grandmother called 911.

Late Tuesday, detectives were trying to piece together what happened. “There was a lot of blood,” Lt. Dave Coleman said. “It was a pretty substantial scene inside the residence.”

He said investigators recovered several knives but added that there “could be multiple causes of death.”