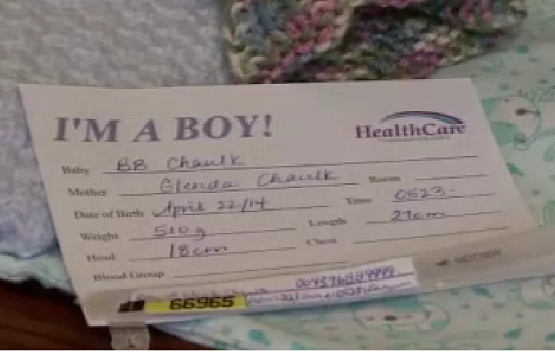 In a second case of its kind in two weeks, a hospital has refused to revive a prematurely-born infant — leaving parents in dismay as they were forced to hold their deceased child.

In Britain, Tracy Godwin, 34, cradled her newborn son Tom in her arms until he died because a hospital in Scotland has a policy that it will not revive prematurely-born babies before 23 weeks because it considers their chance of surviving too low.

Now, in Canada, parents in Newfoundland were left grieving for the same reason.

Anguished parents want answers why a doctor told them their son Aiden would be born with major medical problems and said they should let him die. Three hours after he was born, Aiden died and the parents want to know if medical staff did everything possible for him.

It was a weekend that started with excitement and love, but ended in loss and heartbreak for a Clarenville family. Their son was born prematurely and died a few hours later, but Glenda and Cory Chaulk say their baby wasn’t given a fair chance.

He was born 22 weeks, 5 days into the pregnancy, but under Canadian paediatric guidelines, doctors will not resuscitate a newborn unless its gestational age is 23 weeks. NTV’s Christina Marshall-Jeenes reports.

If video below does not work, go here.