Prior to founding the Religious Institute, Haffner was the chief executive officer of the Sexuality Information and Education Council of the United States (SIECUS) from 1988 to 2000. During her tenure at SIECUS, she created the Religious Declaration on Sexual Morality, Justice, and Healing; the National Coalition to Support Sexuality Education; the Commission on Adolescent Sexual Health; and the Guidelines for Comprehensive Sexuality Education.

Prior to joining SIECUS, she served as the director of education for Planned Parenthood of Metropolitan Washington; and special assistant in the U.S. Public Health Service.

Haffner tweeted that she was seated next to President Obama: 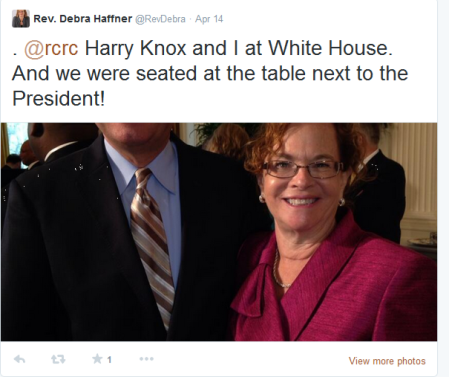 Haffner writes, “I had the opportunity to meet the President, sit with the Honorable Tina Tchen, Mrs. Obama’s chief of staff, and catch up with Religious Institute colleagues such as Rev. Geoffrey Black, the President of the United Church of Christ, Bishop Gene Robinson, the first openly gay bishop elected in the Episcopal Church, and Rev. Richard Cizik, the President of the New Evangelical Partnership for the Common Good. I also had the opportunity to meet such inspirational church leaders as Bishop Vashti Murphy McKenzie, the first woman Bishop of the African Methodist Episcopal Church, Rev. Samuel Rodriguez, the President of the National Hispanic Christian Leadership Conference, and Rev. Joel and Becky Hunter, Northland, A Church Distributed, and tell them about our new safer congregations initiative.”

Apparently the event was full of left wing liberal “clergy”. Anyone surprised?