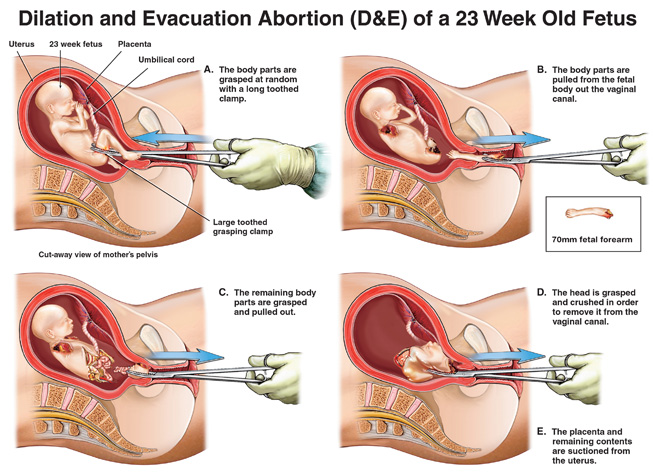 Washington, DC (LiveActionNews) — In a house editorial about an Arizona law that restricts abortions after 18 weeks, the editors of the New York Times assert that “the overwhelming number of abortions occur well before 20 weeks; later abortions mostly often involve severely troubled pregnancies that pose risks to a woman’s health or life.”

This allegation that abortions after 20 weeks are mostly performed for medical reasons has long been discredited by the public disclosures of abortion providers. The salient facts are documented in Just Facts’ research on partial-birth abortion and are summarized below.

Before being banned in 2003, the partial-birth procedure was a preferred method for performing abortions after 20 weeks (see picture on right at this stage of pregnancy). This procedure gained prominence in the early 1990s through Dr. Martin Haskell, who is credited with inventing it. In a 1993 interview with American Medical News, Haskell said:

I’ll be quite frank: most of my abortions are elective in that 20-24 week range…. In my particular case, probably 20% are for genetic reasons. And the other 80% are purely elective….

After this statement was published in a U.S. Congressional report, proponents of legalized abortion adamantly contested it:

• The American Civil Liberties Union, National Organization for Women, People For the American Way, and 50 other organizations sent a joint letter to Congress stating that partial-birth abortions were “most often performed” in cases “of severe fetal anomalies or a medical condition that threatens the pregnant woman’s life or health.”

• Planned Parenthood issued a press release asserting that partial-birth abortions are performed “only in cases when the woman’s life is in danger or in cases of extreme fetal abnormality.”

• The executive director of the National Coalition of Abortion Providers appeared on ABC’sNightline and stated that partial-birth abortions were done only in extreme situations of danger to a woman’s life and fetal anomalies.

Within the next year and half, the claims above were bluntly discredited by abortion providers:

• Ronald Fitzsimmons, the executive director of the National Coalition of Abortion Providers, told the New York Times and American Medical News that he “lied through [his] teeth” when he appeared on Nightline because he was afraid that the truth would erode public support for abortion. Disowning his previous statements, he stated that partial-birth abortions are “primarily done on healthy women and healthy fetuses….”

• Two doctors at a New Jersey abortion clinic spoke with a North Jersey newspaper under condition of anonymity. Both independently stated that their clinic was performing roughly 1,500 partial-birth abortions per year, most of which are elective and not for medical reasons.

The spin out of Washington was that it was only done for medical necessity, even though we knew it wasn’t so. I kept waiting for [the National Abortion Federation] to clarify it and they never did. I got caught up: What do we do about this secret? Who do we tell and what happens when we tell? But frankly, no one was asking me, so I didn’t have to worry.

Without credible evidence that would overturn these candid admissions of abortion providers, there is no factual basis to claim that most abortions performed after 20 weeks are for medical reasons.

Although partial-birth abortions are now prohibited except if “necessary to save the life of a mother,” late-term abortions are still performed for elective reasons by another method called “dismemberment dilation and extraction.” During this procedure, as explained in the Washington Post, “the fetal limbs are pulled off the body in utero, sometimes while the fetus is still alive.” A 2007 Supreme Court ruling details this procedure in greater depth (WARNING: graphic content).