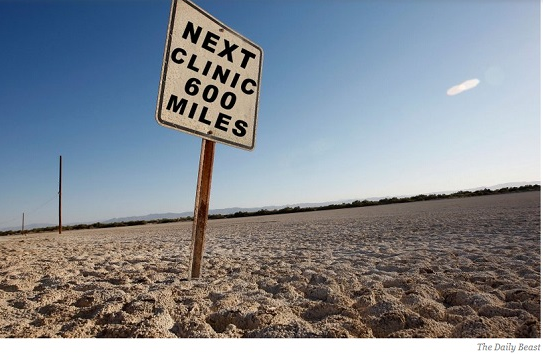 Taking a page from liberal activists concerned with “food deserts” in America’s inner cities, it seems abortion rights absolutists are taking a rhetorical test drive with the arid metaphor for areas lacking many abortion clinics.

“There is a nearly 1,200-mile-wide desert of abortion providers stretching from the western boarder of Idaho to the eastern boarders of North and South Dakota,” the Daily Beast’s Robin Marty whines in her April 14 story, “America’s Abortion-Free Zone Grows,” adding that:

Montana used to be an oasis in that abortion desert, with four clinics in four different cities offering both surgical and medication abortion options, but not anymore.

Last month, an apparent pro-life vandal destroyed the abortion clinic in Kalispell, Montana. Now, the state has just two clinics providing surgical abortions, in Billings and Missoula. This crisis of access affects not just Montana residents but thousands of women in neighboring states, too.

Of course, every pregnant woman’s “crisis of access” is at least one unborn child’s fighting chance for survival, but don’t expect that perspective from the author of Crow After Roe: How Women’s Health Is the New Separate But Equal and How to Change That.

Marty then horned in on a case which has not yet gone to trial and involves the teenage son of a pro-life activist, strongly suggesting that the incident was essentially an act of domestic terrorism, although insisting that, regardless, the “result is the same” in terms of abortion rights:

Susan Cahill, a physician’s assistant, provided abortions in Montana for decades, through fire-bombings and lawsuits but is now no longer practicing. After learning that the building that housed her clinic had been bought and her lease was not being renewed, Cahill moved to a new building this February. Three weeks later, that new clinic was broken into and vandalized beyond repair.

Michelle Reimer, executive director of Hope Pregnancy Ministries, a local crisis pregnancy center, was soon revealed as the owner who forced Cahill out of her old office. Reimer makes no bones about the fact that her intention was to stop Cahill from performing abortions in the city, telling Democracy Now: “We made a stand for the pro-life position in a legal, peaceful and non-confrontational way, purchasing the building in order to advance the cause of life.”

The vandalism, on the other hand, was a destructive act of aggression and malice, according to those who saw the clinic after the attack. Maggie Moran, executive director of NARAL Pro-Choice Montana told the Billings Gazette, “Equipment, records, the plumbing and heating system—all destroyed. And all of her personal things were maliciously torn and stabbed.”

The suspect in the case, Zachary Jordan Klundt, is the son of Twyla Klundt, a board member of Hope Pregnancy Ministries. Klundt, has pled not guilty, although documents from the office were found in his home and his shoe treads match those found at the scene. His mother, meanwhile, resigned from the broad [sic].

Whether the destruction of the clinic is confirmed as a deliberate attempt to stop abortion in Kalispell or simply a random act of violence, the result is the same. In just under one year, Montana has gone from a state with four non-medication abortion providers to a state with only two. Dr. Susan Wicklund, a long-time champion of abortion rights and access, retired and closed her Livingston clinic in the fall of 2013. Meanwhile, its ability to offer medication abortions in a few other clinics is completely dependent on the day of the week and the availability of a provider to administer the medication.

While more than 100 bills limiting access to abortion providers have passed in multiple states since 2011 Montana has been an exception: it’s only legislative move was to try to increase parental consent.

With legislators doing little to stop access in the state, could frustrated anti-abortion activists have taken matters into their own hands to force a clinic closure in Kalispell? Likins of Blue Mountain believes so.

“This wasn’t a random act of violence,” she said. “This wasn’t just one nut job going in and destroying a clinic. This was a calculated, specific act of terrorism where an entire group of people repeatedly pushed an abortion provider out of a place where she had been working for decades. When people get desperate, they get violent.”

The situation in Montana is a reminder that in the abortion provider desert you are just one retirement or one clinic closure away from a state with no legal abortion whatsoever. “When you live in such a small state and there are so few providers, each individual story becomes a much bigger one, especially when it comes to providers,” said NARAL’s Maggie Moran. “With the retirement of Wicklund, and then the clinic destruction in Kalispell, two completely unrelated incidents have now had a massive impact on our state.”

Now, the question becomes how to reverse this trend and bring more care and choices back to the state. For advocates like Likins, the question isn’t will Montana have more access, just how soon it will come about.

“We’ll get a new clinic open,” vowed Likins. “It will happen. It’s only a matter of time. We will have a new clinic in Montana.”

At no point did Marty seek out a dissenting point of view nor consider that maybe, just maybe, there’s just not much of a market for abortion services in the so-called “abortion desert,” both from a lack of demand and most certainly from a lack of supply — doctors who are willing to sully their reputation by performing surgical procedures which take unborn life.

No, to the abortion-rights absolutist, it must be the product of extremism at best and terrorism, at worst, and that all the better to serve the melodramatic narratives they can weave to sympathetic readers in outlets like the Daily Beast.