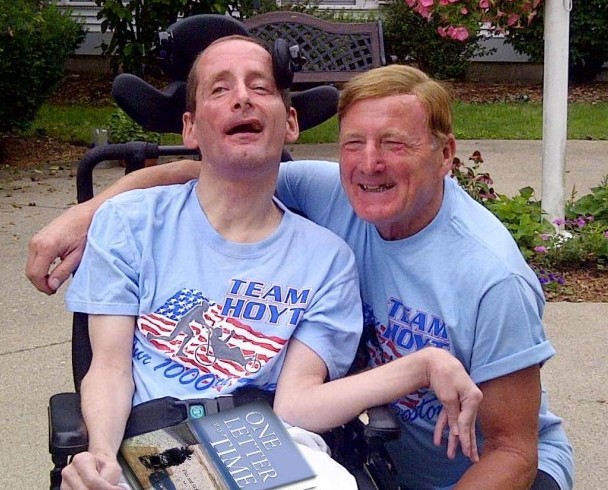 Rick was born in 1962 to Dick and Judy Hoyt. As a result of oxygen deprivation to Rick’s brain at the time of his birth, Rick was diagnosed as a spastic quadriplegic with cerebral palsy.

Dick and Judy were advised to institutionalize Rick because there was no chance of him recovering, and little hope for Rick to live a “normal” life.

One day Rick asked his father, “Dad, will you take part in a marathon with me?” Dick, despite having a heart condition, said, “Yes”.

They went on to complete the marathon together. They also went on to join other marathons, Dick always saying, “Yes” to his son’s request of going through the race together.

Eighty-five times he’s pushed his disabled son, Rick, 26.2 miles in marathons. Eight times he’s not only pushed him 26.2 miles in a wheelchair but also towed him 2.4 miles in a dinghy while swimming and pedaled him 112 miles in a seat on the handlebars – all in the same day. Also adding to their list of achievements, Dick and Rick biked and ran across the U.S. in 1992, completing a full 3,735 miles in 45 days.