Heading this pro-euthanasia panel was a man by the name of Charles F. Potter who, in 1938 was also on the ABCL Committee for Planned Parenthood according to a February 1938, New York Times story.

Also on this board was Sidney Goldstein who sat on the American Birth Control League’s National Council and later was on Planned Parenthood’s Board of Directors. 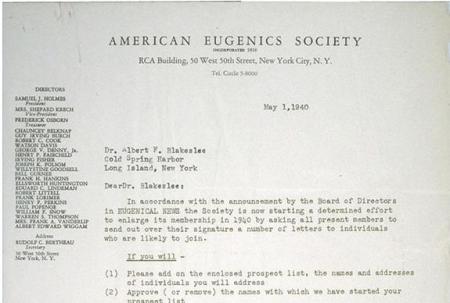 Another more famous name who was sat on the advisory board of this panel was Julian Huxley, who was a recipient of a Planned Parenthood award.

American Eugenics Society Member, Clarence Cook Little was the President of Margaret Sanger’s American Birth Control League (ABCL), at the same time he was on this pro-euthanasia panel.

Clarence Little was the president of the University of Michigan, a founding member of The American Eugenics Society, and a board member of the American Birth Control League which would later be known as Planned Parenthood. (Watch Maafa21)

It is unclear why Planned Parenthood founder, Margaret Sanger was not listed on the above article because Sanger was clearly involved in the Euthanasia Society. Sanger was a member of the American Eugenics Society and many of their members were on this panel. Sanger admitted that she gave a speech to the Klu Klu Klan and in her autobiography, she bragged that she received a dozen invites from the Klan for further speeches.

By 1952, Margaret Sanger was open about her belief in Euthanasia.

See here where Sanger is listed as Honorary Chairman of Planned Parenthood in their early years:

Also listed is Harry Emerson Fosdick, who was a recipient of the Albert Lasker Awards Given by Planned Parenthood in 1953.

Henry H. Goddard is also listed and he was published in Margaret Sanger’s book, The Case for Birth Control.

Also on the list is Samuel H Holmes. According to the film, Maafa21, in a 1929 speech, American eugenicist Samuel Holmes had proposed that mandatory birth control should be used as a tool to eliminate what he called the menace to the white race that had been created by increases in black population. His solution was to have a quota system in which the right to have a child would be controlled by the government and determined by race. At the time, Holmes was on the National Council of the American Birth Control League which would later become known as Planned Parenthood.

Frank L, Babbott is listed as a Vice President of this Euthanasia Society. Babbott was a founding member of the American Eugenics Society.

Frank H. Hankins – is listed on the Board of Director – his associations are listed above.

Charles Francis Potter was founder of the Humanist Society and in 1924 Margaret Sanger wrote an “Introduction for Charles Francis Potter.” Potter was active in the Rhode Island Maternal Health Association, which he served as medical director, as well as Planned Parenthood. He was a member of the American, Rhode Island, and Providence medical societies. In 1967, Dr. Potter was awarded the Margaret Sanger Medal by Planned Parenthood for outstanding service to family planning, after he served 11 years as medical director of its clinic.

President of the Euthanasia Society was Mrs. F Robertson Jones who was also on Margaret Sanger’s ABCL board.

We would later discover that RL Dickinson was President of the Euthanasia Society and Senior VP if Planned Parenthood Federation of America.

In 2012 PETER GOODWIN, MD ended his life in accordance with Oregon’s Measure 16 “Death with Dignity Act,” the landmark legislation that he helped craft and champion into law in 1997. . Aside from publicly advocating for Measure 16, he served as chairman of the Oregon Death with Dignity Committee. He was also a member of the Planned Parenthood of Columbia/Willamette board.

In 1964, Evelyn Ames co-founded the Planned Parenthood Association of Nashville. She served as the organization’s southeastern representative for nine southern states, and on the executive committee of the national board of directors of Planned Parenthood-World Population. She was also a founder and member of the board of the Nashville chapter of Concern for Dying, an advocacy group for the right to die. Ames Davis died in 1993.

Esther Instebo delivered donations and filled fundraiser tables for Planned Parenthood and Washington politicians. Instebo pulled her friends into Democratic Party politics. Instebo worked with the euthanasia organization Compassion & Choices to qualify for help in dying under the state’s Death with Dignity law. Knowing that she had that option “greatly improved the quality of the last six months of her life because she knew she wouldn’t have to put up with what she was afraid of.”

According to researcher, Rita Dillar, when Compassion & Choices, formerly The Hemlock Society, convened its June 2012 conference, former Planned Parenthood insider Theresa Connor was a featured speaker. She was public policy director for Planned Parenthood in Washington state for 15 years and instituted the research and strategy behind the 2001 Erickson v. Bartell case “that required employers’ insurance plans to cover prescription birth control under anti-discrimination laws.

It is interesting how Margaret Sanger, founded in Eugenics, the American Eugenics Society, and members of the Planned Parenthood all helped establish euthanasia and so-called mercy-killing ideologies in America. The purveyors of death have taken their fanaticism all the way from conception to end of life and no one is outside their bloody grips.