Teddy is valued and loved. From the New York Times op/ed introduction to the film by Teddy’s mother, Kelly Obrien:

My daughter Emma was just 3 when Teddy was born, with a viral infection he contracted in utero that caused extensive brain damage. This short film captures her love for Teddy, one not weighted down by disappointment, sadness or a full understanding of all the ways in which he wasn’t “normal…

While I spent those first few years longing for what Teddy wasn’t, my husband, Terence, was able to appreciate him for who he was. As both mother and filmmaker, I felt it was important to find ways to represent Teddy not simply as a tragedy or a constellation of delays and disabilities, but as the sweet, happy and complicated kid that he is. Emma’s connection with Teddy reveals this perfectly.

On the other, when Canadian farmer Robert Latimer murdered his daughter Tracy because she had cerebral palsy, he was hailed by a majority of Canadians as a heroic loving father and his imprisonment decried as unjust.

So why the difference? Why is Teddy valued and Tracy’s murder justified or excused even though they have (had) similar conditions?

Relativism. Teddy’s life is depicted by his family as clearly worth living and loving. Tracy was defined by her father and his supporters as having a useless life of meaningless suffering–despite her big smile for her daddy/murderer in the picture below.

But the sanctity of the lives of our ill or disabled brothers and sisters should not depend on how they are defined by family members. Rather, the Teddys and Tracys among us need to unequivocally be seen as flesh of our flesh and blood of our blood, each deserving of equal protection, acceptance, and love. 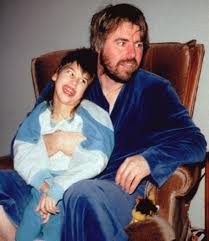