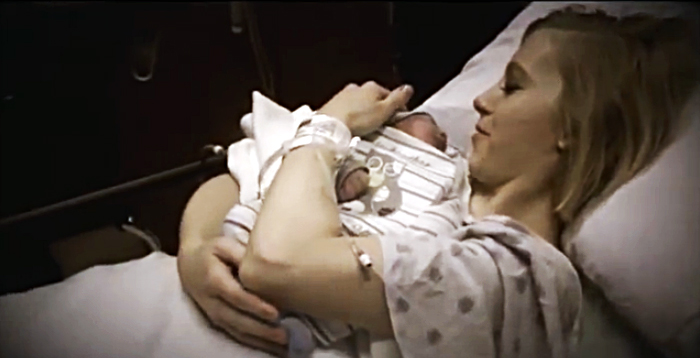 While the pro-abortion side of the abortion debate says the baby will die anyway, Heather’s decision shows how a reliance on a faith in God and a determination to enjoy and appreciate the gift of life allowed her and her family to celebrate her baby’s life, no matter how short it may be. Little Grayson ultimately died eight hours after his birth but Heather and her family were blessed, not burdened, but his short time with them.

A mother whose child died eight hours after his birth says God gave her the strength to choose life where most women choose abortion. Today, she helps other mothers who are facing the same decision.

“God abundantly blessed us. It’s amazing how much strength and grace He has given us, because we couldn’t have done it on our own,” Heather Walker of Memphis, Tenn., told The Christian Post in an interview on Wednesday.

Walker’s blog, “Our Sweet Boy Grayson James,” chronicles her personal struggle with anencephaly, the terminal disease with which her son was diagnosed months before his birth.

Most women choose abortion when they learn their child will die shortly after birth, Walker told CP. Anencephaly has “a 95 percent abortion rate.” But Walker’s faith in God led her to choose life. “I am a Christian and I think that God has a plan for every life – if He creates it, He has a reason for it,” she declared.

Today, Walker helps other mothers who are struggling with an anencephaly diagnosis, and mentioned recent conversations with families in Virginia and two mothers near her hometown of Millington. “We actually just got a call this morning,” she told CP.

Many of the families she has spoken with are Christian, and Walker shared that, “they are making the same decision because they know that’s what God would want them to do.”

Walker said there is nothing she can do to help prevent the disease, but she can help women whose children have been diagnosed. Primarily, she gives them hope.

“You’ve already walked it, so you have not the exact same experience, but you can give them a little foreshadowing of the things that are to come,” she said.