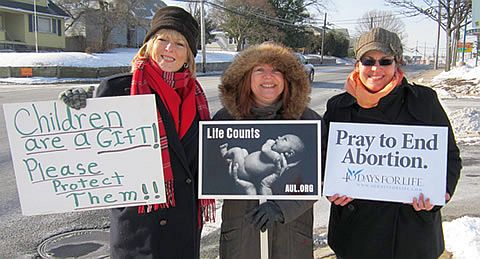 It’s cold in many 40 Days for Life locations during this second week of the campaign! But that’s not stopping the prayers outside one really cold Planned Parenthood center.

Before I share that story, here is a beautiful report about a saved baby that shows the power of prayer on the sidewalks … and the value of easily available ultrasounds offered by pro-life pregnancy centers.

The third 40 Days for Life campaign is now under way outside Whole Women’s Health in Baltimore’s Fullerton section. Jody, the local director, wrote to say she was excited to share magnificent news.

“A baby’s life was saved,” she said, “thanks to the faithful, prayerful presence on the sidewalk!”

A young woman and her friend had arrived at the abortion center – and walked past the people quietly praying on the sidewalk. After a while, the two women came out to talk. The one who was thinking about abortion said the atmosphere inside the building was cold.

Her friend pointed to the life-affirming signs the volunteers were carrying and noted, “You can’t ignore that.”

With that, the two women left – on their way to a pro-life pregnancy center for an ultrasound exam. “I know that you are praising God with us right now,” Jody said.

“What joy there is in freezing for life!” Those words came from Eileen in Spring Valley, who added that “prayer power is surrounding Planned Parenthood.”

Temperatures were in the single digits as Spring Valley started its twelfth campaign, but prayer vigil participants were able to “stand tall knowing the truth: life is precious and each one of us is called to defend and protect the most innocent among us.”

The volunteers were warmed by God’s promise of protection in Psalm 91 – that God, in whom we trust, will be our refuge and our fortress.

Volunteers arrived Saturday for what they thought would be a heart-wrenching day on the sidewalk, but there was unexpected good news – there would be no abortions that day!

But Gaby in El Paso says there was still non-stop prayer at the 40 Days for Life vigil. “Knights on Bikes showed up,” she said. These Knights of Columbus “prayed with all their hearts to end abortion.”