Liberalization of California’s abortion laws last year could not save the Family Planning Associates abortion clinic in Montclair, California, which has closed due to a lost lease. The building is up for sale and there are currently no plans to reopen the clinic at another location.

All services are expected to halt by the end of February, but furnishings stacked behind the clinic near a large dumpster, which was loaded with medical and office equipment, more furniture, brochures, and even money bags from a local bank, indicate that the business is finished.

“When abortion clinics are tossing out the money bags, you known they have shut down for good,” said Troy Newman, President of Operation Rescue, who has personally spent time protesting at the facility. 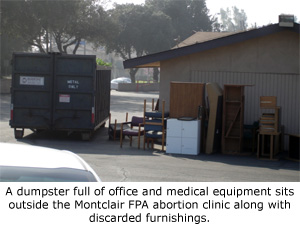 The FPA abortion business operated for over two decades in a building that was ironically once a funeral home. Some local pro-life activists who gathered on the clinic’s final surgical abortion day on Friday, February 21, have protested and sidewalk counseled continually there for over twenty years. The final day abortion pills was dispensed was Wednesday, February 26.

The clinic was also the site of several known abortion-related medical emergencies, the most recent of which occurred on October 11, 2013. During a botched abortion there on June 20, 2006, the abortionist who was responsible for the injury was found to have been operating under an assumed name.

To cover their bases, local activists have asked area businesses not to lease to the abortion business through letters to the editor which have been published in local newspapers.

“It looks like this abortion facility has thrown in the towel and is referring women to other abortion clinics in the FPA chain,” said Newman. “Because there will no longer be an abortion business in this community, we know many women will simply opt to keep their babies. It’s a proven fact that when abortion clinics close, lives are saved.”

Sidewalk counselors, including Sharon Guengrich, spent years setting up elaborate pro-life displays outside the clinic on abortion days that featured Halloween decorations such as skulls and grim reapers, along with large images of aborted babies. Over the years, they successfully turned hundreds of women away from the abortion clinic and to pro-life centers where they received practical help.

Family Planning Associates abortion clinics are generally high volume clinics, but in recent years, surgical abortion appointments in Montclair had been reduced to one day per week.