A video that has recently gone viral on Facebook with over 195,000 shares that depicts a pre-born baby inside of its amniotic sac.

The video has sparked massive discussion on social media about the humanity of the unborn, legality of abortion, and reality of what life in the womb looks like.

Some commenters on these social media outlets have speculated that the baby was delivered as the result of an auto accident, although we could not confirm this.

Estimating based on data available from the Endowment for Human Development, the baby looks as if his gestational age may have been around four months. Abortion at this stage of development is available on-demand in the United States. 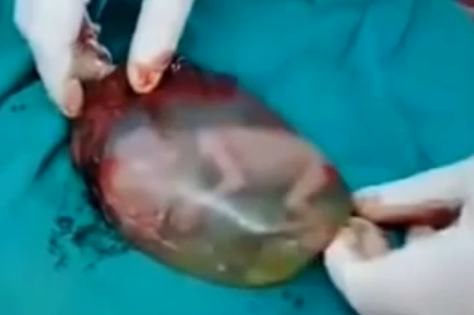 e record straight in the face of the many misconceptions about abortion in the United States which are circling.