“These numbers show that the pro-life movement is gaining ground and that the abortion industry is collapsing – mostly due to its own negligence and greed, which has been exposed by their unwillingness and inability to comply with even the most rudimentary safety standards,” said Troy Newman, president of Operation Rescue.

There are several reasons for the closures including:

• A decreased demand for abortion reflected in a declining abortion rate.
• Increased pro-life sentiment.
• A flood of new state laws that establish abortion standards.
• Increased enforcement of existing laws.
• Greater incidents of documenting and reporting of abortion abuses by pro-life activists.
• Retirement of aging abortionists, most of which are not being replaced.

The state with the most closures was Texas at 11, most of which shut down after Texas passed an abortion law earlier this year that required abortionists to maintain local hospital privileges. New clinic safety rules accounted for closures in Pennsylvania and Maryland as well.

• Nova Healthcare Center, Fairfax, VA, closed because of failure to pay back rent that caused Nova’s landlord to terminate their lease amid revelations from pro-life groups that women were being injured and mistreated there.
• Associates in OB/GYN Care, Baltimore, MD, closed by the state after repeated dangerous deficiencies, including the death of patient Maria Santiago in February.
• New Women All Women, Birmingham, AL, was ordered closed by a judge after pro-life groups documented and reported it for operating illegally in violation of a closure order last year.
• Office of Dr. Feliciano Rios, Chula VIsta, CA, a troubled abortionist who has felony convictions for insurance fraud and firearms violations
• Intgrity Family Health, Philadelphia, PA, closed by the state after pro-life groups discovered its illegal affiliation with the notorious abortionist Steven Chase Brigham.

Planned Parenthood clinics account for 29.55% of all active surgical abortion clinics (172 of 582) and 93% of all clinics that offer the abortion pill only. Each year, Planned Parenthood is responsible for about a third of all abortions done in the U.S.

The survey was a major update to a previous one conducted by Operation Rescue, which resulted in the launching of AbortionDocs.org in January, 2012. That website lists every American surgical and medication abortion clinic along with documents that often show that the clinics have engaged in dangerous practices.

“We have invested untold man-hours to ensure that AbortionDocs.org is constantly updated with the latest information about the status of abortion clinics, whether they are facing disciplinary action, or have been temporarily or permanently closed,” said Newman. “It represents the most accurate information on abortion clinics in existence.”

Newman said that skeptics often express concern about whether clinic closures represent true pro-life victories. Some people still wrongly believe that when one abortion clinic is closed, another opens to take its place, making the effort to close abortion businesses futile at best. Newman says the latest numbers, carefully documented by Operation Rescue staff, show how effective pro-life efforts to close abortion clinics have been.

“We’ve been able to categorically debunk the notion that the abortion industry is winning,” said Newman. “The numbers don’t lie. A 73% drop in surgical abortion clinics is a significant loss. We are witnessing the death throes of the abortion cartel.”

In fact, even with the opening and/or discovery of six additional clinics, the number of surgical abortion clinics decreased by 81 in 2013. This represents huge gains over 2012, when 24 abortion clinics were known to have closed.

The closures have caught the attention of the national media. Bloomberg News published a story on the closures called “The Vanishing Abortion Clinic” (November 27, 2013), based partially on data provided by Operation Rescue prior to the completion of the most recent survey.

“At least 73 clinics have closed or stopped performing abortions. New laws are responsible for roughly half of the closures, while declining demand, industry consolidation, and crackdowns on unfit providers have also contributed to the drop,” the article stated.

A map (with now outdated numbers) illustrated the closed abortion clinic locations and the reasons for their closures. 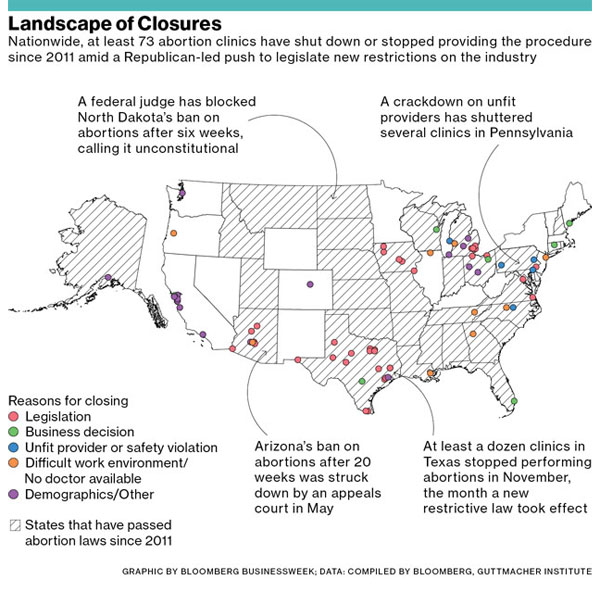 Predictions for record decrease in abortions

In November, the Centers for Disease Control released its latest abortion figures that showed a 3% decrease in abortion numbers in 2010. This decrease is in keeping with a 20 year abortion trend.

Data obtained by Operation Rescue predicts that when 2011-2013 numbers are in, 2013 will likely see the largest drop in abortion numbers since the 1973 Roe v. Wade Supreme Court decision decriminalized abortion.

“After the 2010 mid-term elections, conservative gains resulted in a wave of pro-life legislation flooding statehouses across America,” said Newman. “Much of that legislation was inspired by information gathered by pro-life groups, including Operation Rescue, which have increasingly publicized documentation of abortion abuses. Once legislators find out what is really going on at abortion clinics in their states, they understand the urgency of passing pro-life laws that protect women and their babies from clinics that prey on their vulnerabilities.”

While national abortion numbers are three years behind, some states have more recent abortion numbers that confirm that additional oversight and watchdog efforts by pro-life groups close abortion clinics and save lives.

Kansas is one state that is an example of how closing abortion clinics saves lives. Since 2001, every time an abortion clinic closed in Kansas, the number of abortions significantly dropped the following year. Since the last clinic closure (While a new abortion clinic reopened earlier this year, there is not yet data to show how that clinic has effected abortion numbers in Kansas.) 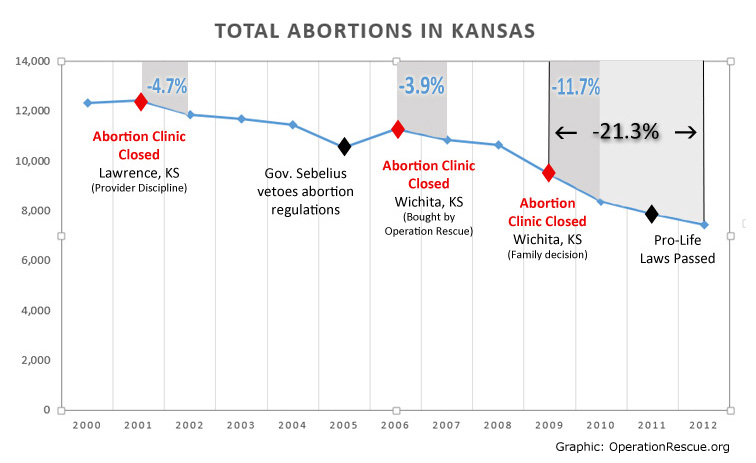 Even temporary closures are effective at saving lives, the impact of which resonates years into the future. For example, earlier this month, a woman contacted Operation Rescue and indicated that while perusing the OperationRescue.org website, she noticed a May 2007, article about an Englewood, New Jersey, abortion clinic that had been temporarily closed due to gross deficiencies discovered after a botched abortion landed one patient in the hospital. She said that she had been scheduled for an abortion during the time when the abortion clinic was closed.

“The abortion clinic called me to reschedule and I never went. I have a beautiful girl that’s 6 years old now!” the woman stated.

While the dramatic decrease in the number of abortion clinics is great news, Newman acknowledges that there is still a long way to go. Desperate, the abortion cartel has attempted to push back. From violent protests in Texas to the liberalization of abortion laws in California, it is clear that Big Abortion is attempting to thwart the inevitable.

In fact, abortionists greatly fear the emerging trend of abortion clinic closures because they are acutely aware that theirs could be next.

“They know, like we do, that if one looks closely enough, none of them are completely following the law,” said Newman

He continued, “We will continue to develop new tactics to close abortion clinics until there are none left. That is our goal. We just don’t want to reduce the number of abortions. We want to end abortion altogether. But until we can get there, our strategy of closing abortion clinics by using the tools the system has provided is an effective way to save lives right now.”