I predicted that Planned Parenthood would not in fact provide more breast care services in 2012 than it had in past years, despite the windfall. I offered a $100 bet to abortion advocates. Not one person took me up on it.

But surely an infusion of $3 million cash would reverse this gloomy pattern, or at least allow them to maintain 2011 levels… right?

Planned Parenthood just released its 2012 annual report (it’s always a year behind). Expansion beyond their wildest dreams, my foot. Try 549,804 breast exams. That’s about 90,000 fewer than the past year, and a whopping 34% decline since 2009.

But that number is hiding on page 15 of the 2012 report. The first reference you’ll see to breast health is this, on page 7: 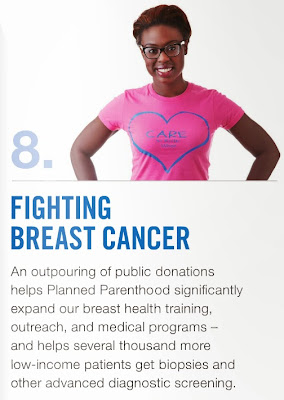 You read that right. “Significantly expand.” That is a bald-faced lie.

They’re a little more subtle on the next page: “1,040,000 Breast Exams and Pap Tests.” Combining breast exams with Pap smears, that’s clever. It doesn’t change the fact that thousands of people gave them money to test more women for breast cancer, and Planned Parenthood did exactly the opposite.

Most Planned Parenthood breast fund donors are not abortion-loving extremists. They’re just regular people who saw something in the news about reduced funding for breast cancer detection, and wanted to respond. And Planned Parenthood took advantage of them. Where that $3 million actually went is anybody’s guess.

I’m not clairvoyant. Planned Parenthood is just that damn predictable. I hate to say I told you so.