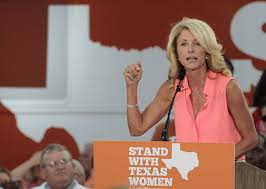 Even when the insincerity of pro-abortion politicians is transparent, for them even to pretend to believe that we’d be better off without aborting any children is going to incur the wrath of those who believe there are never enough abortions and to suggest otherwise is verboten.

Yesterday I’d thought about mentioning (at least in passing) an entirely phony baloney assurance of Texas gubernatorial candidate and pro-abortion icon Wendy Davis. Without retreating a step from her support for “reproductive health,” she told CNN affiliate KGBT, “The goal that we should have is that we see zero abortions.”

This didn’t even qualify as good camouflage; it was just something she said to convince people that she isn’t as crazy as the people who came to the Texas capitol last summer to support her filibuster of an important pro-life law.

However that did NOT sit well with Katie McDonough. In “What Wendy Davis gets wrong,”  McDonough begins by telling her readers that

“Davis did this for the same reasons Bill Clinton back in 1996 said abortion ‘should not only be safe and legal, it should be rare,’ and for the same reasons so many other advocates and lawmakers use the exact same line. Because they believe it’s a moderate position that will save them from being cast as ‘extreme’ when it comes to abortion rights, which they see as a kind of political death.”

Never mind that virtually every pro-abortion Democratic candidate—no matter how extreme their voting record is—paints a picture of themselves as flaming moderates. They have to because, contrary to McDonough, if their true stripes were revealed, they’d be crushed.

So McDonough starts with the usual refrain. Any suggestion that it would be better not to abort than to abort is inflicting “stigma” on women and “shaming” them. She quickly moves from the same-old starting point (abortion to save the woman’s life) into defending abortion for “health” and abortion “in all kinds of circumstances” without so much as a by-your-leave.

In order to commit to abortion on demand forever and two weeks, McDonough melds them together: abortion is “a medical procedure that saves women’s lives and protects their autonomy” (my emphasis).

Each successive paragraph is another example in evasion, another reason why (to McDonough) what is unacceptable to an overwhelming percentage of Americans ought to be promoted by pro-abortion politicians.

McDonough concludes with this (check out the last paragraph!):

“’Those of us who are doctors and policymakers should have procedures and laws in place that understand each woman’s situation is unique. We have to ensure that women are empowered to make the best medical decision for them, based on their circumstances,’ [Dr. Lin-Fan] Wang noted, reflecting on her own patients. ‘I know from personal experience that women are extremely thoughtful about these decisions. We should be focused on their health and the best ways to support them.’

“If we’re doing that — as I’m sure Wendy Davis would agree – then who cares about the numbers?”

Get it? If there were 4.2 million abortions, instead of 1.2 million abortions a year, who would be so petty as to count? After all, that larger number would mean “that women are [fully] empowered to make the best medical decision for them, based on their circumstances.”

Even Davis, who filibustered a law that would protect unborn babies capable of feeling pain from the horrors of abortion, might blanch at that. But I doubt it.