Operation Rescue has obtained a copy of an inspection report issued by the Missouri Department of Health and Senior Services detailing 14 pages of violations at the Planned Parenthood abortion clinic in St. Louis discovered during an inspection of the facility in January, 2013.

The documents also reveal evidence that Planned Parenthood is working with city officials to prevent the public from obtaining information about 911 calls that has traditionally been within the public domain.

Deficiencies cited during an inspection earlier this year included:

• Violations of infection prevention protocols.
• Rusty surgical tables, suction abortion machines, IV stands, and other equipment.
• “Copious amounts of dust” in surgical rooms and on equipment.
• Hiring individuals without performing a mandated search of the Employee Disqualification List.
• Retained left-over drugs that were supposed to be destroyed after a single use.
• Lack of appropriate drug-handling policies.
• Expired drugs.
• Expired postpartum balloons used to reduce hemorrhage after abortion.

The inspection was prompted by complaints filed by Operation Rescue and other local activists after they had documented numerous medical emergencies at the St. Louis Planned Parenthood facility, raising concerns about the clinic’s safety.

Included in the report were 28 pages of proposed corrective actions filed by Planned Parenthood in response to the list of deficiencies. Included in the corrective plan were defensive excuses for the recent spate of at least 25 emergency patient hospitalizations since June, 2009.

According to Planned Parenthood, there were the same number of hospital transfers during a particularly hazardous 3-month period of time in 2012 as there were in all of 2011. The increase in medical emergencies was blamed on their “newest provider” who was a “new trainee.” The increased hospitalization rate was defended as a normal occurrence, stating that “for new trainees, this is expected, i.e. that transfers may be higher.”

“I wouldn’t want to be the guinea pig that had to undergo surgery with the inexperienced person in training referred to in the correction plan,” said Operation Rescue President Troy Newman. “It appears that Planned Parenthood is allowing their new hires to practice on women with disastrous consequences.”

Yet, the Department of Health seemed satisfied with the “new hire” excuse. 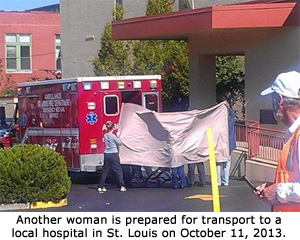 Continuing to expound on planned emergency protocol changes, Planned Parenthood appeared more concerned about pro-life activists who witnessed over two dozen injured women being transferred from the abortion clinic to hospital emergency rooms. Staff were instructed to prevent the activists from photographing the events. Clinic escorts then began deploying hand-held sheets to prevent witnesses from documenting the gurneys as they were loaded into awaiting ambulances.

“This is more about protecting Planned Parenthood from accountability than protecting patients’ privacy,” said Newman. “In reality, this abortion clinic is working with the City of St. Louis to make sure no one discovers the truth about the full nature of abortion complications so the abortion business can never be held accountable. Failing to fully inform dispatchers of pertinent facts related to a patient’s condition could delay proper care and place the woman at additional risk.”

In fact, Operation Rescue noticed the city’s change in policy concerning the release of public 911 records. In September, 2013, Operation Rescue released a letter showing that the City of St. Louis had refused to release 911 records related to incidents at Planned Parenthood as required by the state’s Sunshine Laws even though it had previously complied with similar open records requests.

After receiving reports that two medical emergencies occurred on August 21 and September 10, 2013, Operation Rescue staff member, Deborah Myers, made an open records request for 911 records related to the August 21st incident. That request was denied by Patricia L. Wendling, an assistant city attorney, citing HIPAA laws that protect patient privacy. Wendling specifically noted that records that were responsive to Operation Rescue’s request “could not be de-identified.” [Read the letter]

Due to Operation Rescue’s long experience of obtaining 911 records all over the nation through open record requests, Wendling’s use of HIPPA to deny access to public records simply did not ring true. Usually, patient identifying information is redacted in order to satisfy patient privacy concerns, but the rest of the record remains public. St. Louis is taking it further by denying any information at all.

“Wendling’s argument that the otherwise-public records are protected by HIPAA is spurious at best. HIPAA hasn’t changed since last December, so if it was legal to release the records to us then, it should be legal to release them now,” said Newman. “Looking at Wendling’s denial letter in the context of the statements made in Planned Parenthood’s correction plan, it looks like the city is now in cahoots with Planned Parenthood to conceal public information about medical emergencies in order to keep important information about the clinic’s safety issues from the public. This represents a shocking abuse of power, in our opinion.”

Meanwhile, the Missouri Department of Health has closed the case that prompted the inspection after determining that the complaints, which raised concerns about patient safety, were “without merit” even though its own inspection report detailed clinic practices that placed women’s safety at risk. Since that determination was made sometime in February, 2013, there have been at least four more women hospitalized after receiving abortions at Planned Parenthood.

The St. Louis Planned Parenthood is the last remaining abortion clinic in Missouri, which may explain the resistance to providing information that could potentially lead to regulatory board action that would damage or close Planned Parenthood’s abortion business.

“The collaboration of the city government with Planned Parenthood to hide the truth about safety risks at that abortion clinic places the lives and health of women in danger,” said Newman. “We continue to explore legal avenues that would encourage the city to comply with open records laws and also hold Planned Parenthood responsible for shoddy practices that are sending women to the hospital at an astounding rate.”

Anyone in St. Louis that witnesses a medical emergency or is the victim of abortion complications at the St. Louis Planned Parenthood abortion clinic is encouraged to contact Operation Rescue at 316-683-6790.

Below is a list of dates that witnesses have seen ambulances transporting women to the St. Louis Planned Parenthood, some with links to further information about the emergencies.