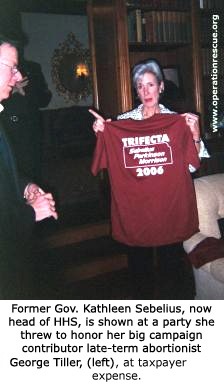 Yesterday, HHS Secretary Kathleen Sebelius appeared before the House Energy and Commerce Committee and testified under oath that she did not know if Obamacare paid for abortions. Can we seriously believe that?

We know Sebelius to be a radical abortion activist who, as Kansas Governor, invested the better part of her two terms covering up criminal abortions and blocking legislation that would have supplied oversight to abortionists who were running amok over the health and safety of women.

If there is one word that describes Sebelius’ actions as a public “servant” it is the word “cover-up.”

As governor, Sebelius covered up for filthy and unsafe abortion clinic conditions when she vetoed common sense clinic safety laws in 2003 and 2005. In her 2003 veto statement, Sebelius proudly declared that Kansas abortion clinics met the “highest standards for medical care in the country.”

Meanwhile, abortion clinics in Kansas City and Wichita were operating in blood-smeared facilities infested with roaches and other vermin while George Tiller’s late-term abortion clinic in Wichita was sending one woman after another to the Emergency Room – and one to the morgue.

If this is what Sebelius considers the “highest standards for medical care,” then we have every right to be concerned on several levels about Obamacare under Sebelius’ administration.

In fact, Sebelius hosted a secret soiree for Tiller and his entire abortion clinic staff at the Governor’s Mansion in 2007 while Tiller was under criminal investigation by the Attorney General’s office. Photographs of that event that were obtained and published by Operation Rescue show a cozy relationship between Sebelius and Tiller and have appeared recently on Fox News and other news outlets as evidence of Sebelius’ avid support of radical late-term abortions opposed by the vast majority of Americans.

However, when we made public those photos and the receipts that proved the party was paid for by Kansas taxpayers, Sebelius fabricated a story that the party was a prize Tiller won at a silent auction held by a Political Action Committee. Operation Rescue again obtained evidence that her story was completely untrue and that taxpayers did indeed foot the bill for the lavish steak-and-lobster gala.

Soon after, Sebelius appeared at a birthday party thrown in her honor by Planned Parenthood where jubilant abortion supporters danced the conga line in celebration of Sebelius’ policies that aided their cause.

Operation Rescue would soon catch Sebelius in more untruths. During her confirmation hearings for the HHS post, Operation Rescue published documents that proved she low-balled the amount of campaign contributions she had received from her friend, Tiller. She was forced to amend her statement to the Senate Judiciary Committee. That moment of deception delayed her confirmation, but should have derailed it.

Over and over again, the mainstream media has ignored documented evidence of deception benefitting her abortionist friends that should have completely discredited Sebelius long ago. Each time she was caught red-handed in a cover-up of the truth, reporters gave her a pass.

Now, we are supposed to believe Sebelius when she says she does not know if abortion is funded under Obamacare when that issue has been a point of numerous legal challenges and a famous filibuster by Sen. Ted Cruz? Her statement has all the earmarks of another cover-up.

We know the truth, even if Sebelius won’t admit to it. Obamacare has carefully obscured numerous ways to fund abortion through premiums in some cases and through a surcharge in others. That surreptitious funding represents billions of dollars in tax-payer funded bail-out money to an abortion industry that has been imploding in recent years. Just this year alone 46 abortion clinics have closed and abortion numbers continue to fall.

Operation Rescue calls on Sebelius to admit her true agenda and resign. Her Obamacare scheme is a failure that hurting the American people who are losing their legitimate healthcare plans by the millions. That has left the rest of us to pay exorbitantly high premiums along with hidden surcharges that fund the taking of lives of innocent babies.

Sebelius recently said that she “doesn’t work” for those calling for her resignation. She’s probably right. She’s far too busy working for her cronies in the abortion industry to make sure the American people unwittingly pay to bail out their grisly child-killing businesses.

It is time for a “pitchfork rebellion” of sorts to the tyrannical Obamacare debacle. Please join us in rejecting participation in this immoral scheme to force Americans to pay for abortion by signing the Pledge for the Preservation of Liberty. We will not comply with the Obama/Sebelius order that compels us to violate our consciences by funding the taking of innocent life through abortion. If enough of us stand strong, we can make a difference.