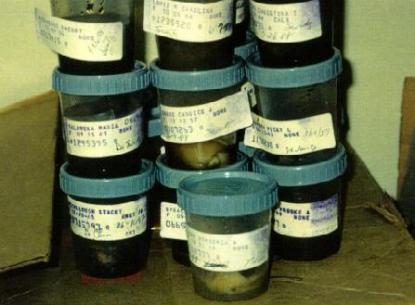 LifeNews Note: WARNING: This article contains very graphic descriptions and accounts of the treatment of the bodies of babies after abortion. The author retained the original spelling and grammar of the posts for accuracy, so all mistakes belong to the original posters.

One of the most convenient things about abortion is that it takes care of the perceived “problem” in a permanent way—people walk into the abortion clinic with a child growing inside them, and leave after the child’s forcible eviction. The pro-life movement tries to prevent people from entering the abortion clinic in the first place, and urges people to seek healing if they decide to go through with the abortion after all.

So what happens to the babies after they are killed?

Some, we know, are cremated. Others are tossed in the trash, and discovered by pro-lifers like Dr. Monica Miller, who dutifully record their fate and give them the funeral and respect their humanity demands. But what about the other babies—the ones shipped off in containers and sealed buckets to pathology labs? When searching for the answer to that question, I found a series of horrifying testimonies on a Student Doctor Network Forum hosted by St. George’s University. On the discussion board, those who worked with the bodies of aborted babies shared their horror at what they saw.

“Anyone get tripped on these?” one wrote (spelling and grammar errors his), “I’m talking especially the big ones, where you can actually make out facial expressions like they knew they were being hacked the hell up (im serious). I almost went bonkers once over one, that is some scary crap. Am I the only pathologist who freaks when a 0.5 cm eye ball comes rolling out of bag and stares right at you…I know we are thinking this, just no one in pathology is talking about it.”

Another pathologist, identifying himself as “Andy Milonakis,” responded by saying, “Totally trippy man. We get a fair number of fragmented fetuses from abortion procedures and they come in a container with formalin. The fact that they’re all hacked up is disturbing to begin with. Of course, there is the whole eyeball issue which freaks me out as well. Echoing in my mind is the sound effects from the movie Psycho…Reee Reee Reee Reee Reee Reee Reee!”

“One incident really freaked me, it was a boy fetus, at least 3+ pounds, around 24+ weeks. It sat decomposing because the rest of the staff was AFRAID of it, Im not joking. Then the chief of staff told me to deal with it because I was the FNG (f-kcin new guy) so I went to work. Pulled out 2 well formed arms and then the torso, headless. The head was at the bottom of the container, when I pulled it, he had this expression of such utter horror it flipped me wayyyy out, my PA saw it and ran, literally left work and went on disability (Im serious here). It was like a headless screaming baby, like it had been born at least for a split second to realize it was screwed and let out one agonal yelp. The story of this reverberated around the department, someone actually accused me of doing what should have been a ME case and threatened to call the medical board! Im not joking, I woke up once shortly after that in a cold sweat with piss running down my leg….not pretty.”

It is the eyes, it seems, that disturbs those dealing with the corpses of butchered pre-born children the most. Another pathologist wrote:

“Most of my abortion-path anecdotes come from my PSF. Here one of the residents grosses most of them in as part of some project he is doing, and we are more than happy to let him.

1) Anencephalic baby, otherwise intact. Those are disturbing to look at. Saw quite a few and they never really get comfortable to look at.

2) When doing one POC that was about 12-15 weeks, somewhere around there, I put through the entire hand into a histology block, so that I could see what a developing hand looked like. The histotech freaked out when she saw it and I wasn’t allowed to do that again. So I stuck later to doing things that weren’t recognizable, such as the full cross section of the 8 week fetus anencephalic head, and the full larynx, etc.

3) The strangest are when you get the macerated contents, and you are able to recognize a few parts here and there – usually a leg or an arm, sometimes the heart. But it’s odd when you can’t find a large portion of it.

4) There was a stillborn birth at about 12 weeks or so and it was sent to the morgue for some reason, and never claimed. A couple of months later the family decided they wanted an autopsy. So I had to do an autopsy on a mummified 12 week fetus. They had bothered to put the little bonnet on its head, but otherwise it was shriveled and brown.

5) 16 week or so fetus, the POC is sent down as one specimen, and there is a second specimen labeled “heart.” They wanted us to identify if there were any clear cardiac anomalies. It was about the size of a marble. I took it to the dissecting scope and found the PFO but that was about all I could tell.

6) about a 12 week fetus, sent down POC and wanted to know if it was an imperforate anus.

On a related note though, eyeballs are the specimen that freaks me out the most. Cutting into an eye makes me squeal. I remember doing it the first time in anatomy lab and I felt like I was sticking a knife into my own eye.”

Some of the anecdotes on the discussion board are even worse, simultaneously morbid and macabre:

“I usually like chow down on White Castle while my trusty lab assistant has to stack all the baby body parts, limb amputations and reduction mastectomies into the incinerator. It has almost a Nazi concentration camp feel it all sometimes, one of my assistants today tried to joke about this leg and aborted fetus we were transporting, I snapped “have some f-ing respect!!” then started laughing too, you cant help it. Its so unbelievably insane. Nothing med school prepares you for.

PS-Anyone else hear the story about the 1200 aborted fetuses that were found during a siemic refit underneath a California hospital?? Turned out the company they were hiring to incinerate them was just stuffing em under the foundation. When the hospital admin found out they got pissed and had the pathology staff yanking molded abortions out for days…”

Others, it seems, got used to what they saw:

“In any case, no, abortions don’t freak me out whatsoever. Maybe if a twin IUFD case showed up and one was giving the other a Dirty Sanchez, well, perhaps then I would take pause. Until then, no amount of googly eyeballs or tiny jaws dislocated “mid-scream” does anything to humanize the little sacks of neverweres for me.

There are quite a few things that I find disturbing, but few of them spill directly out of the womb.”

But occasionally, the reality of abortion would hit home unexpectedly. Another poster responded:

“Before med school I worked as a autopsy tech/path lackey and one of my jobs was dumping the old surg path specimens to drain off the formalin and then bag the specs for incineration. Sounds unpleasant but I actually enjoyed it cause I could listen to NPR and not be bugged. Anyhow, I would get going fast just dumping specimen after specimen in the sink, until one day I dumped a whole intact fetus, ~ 25 weeks old into the sink. Closest I ever came to fainting. So completely unexpected after seeing gallbladders and colons day after day.”

These people work in the dark underbelly of our society, where the corpses of the inconvenient arrive to be disposed of. They see the rotting bodies brought about by the narcissism of our culture’s rotting soul. No sacrifice is too great for the right to live how we want, even if it means others cannot live at all.

A culture basing its collective lifestyle on killing is unsustainable. We may not be able to revive the skeletons in our closet. But we can at least open the closet.