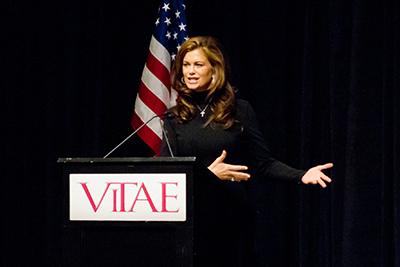 As a supermodel who graced the covers of magazines world wide, Kathy Ireland told over 300 people gathered in Columbia, Mo., on September 24 she was told by photographers to “shut up and pose.”  Now this design company mogul tells those fighting for the pro-life cause to “speak the truth and never let anyone silence you.”

Ireland told those gathered at the Holiday Inn Executive Center, “The work you are doing through Vitae is life-giving and life-changing.  There are people trying to silence us, so thank you Vitae Foundation!  Communication is a powerful tool, and it is a great way to connect with women with powerful results!”

The former Sports Illustrated (SI) swimsuit cover model considered herself a “Pro-Choice Christian” until she dove into the medical books of her husband, an emergency room doctor.  She used those science texts to even change her husband’s view on abortion.  Then she did something many told her not to do—go on Bill Maher’s HBO show “Politically Incorrect” and take the pro-life view.

“I was told it was a lose-lose situation and would kill my business.  But I thought if I did this maybe one woman watching wouldn’t kill her baby,” Ireland shared.  Thankfully she had a business partner who encouraged her to do it, saying if one woman watching cancelled her abortion appointment, it would be so worth it.”

On that show she laid out the science of each individual having its genetic blueprint at the moment of conception, the DNA.  “According to the law of biogenesis, all life comes from pre-existing life.  Each species reproduces after its own kind.  Therefore human beings can only reproduce and give birth to other human beings.  We don’t start out as one species and suddenly become human,” Ireland explained.

The 50-year-old mother of three admitted she did not want to be pro-life at all in those early days of scientific discovery.  So she called the people who got her to be pro-choice in the first place, Planned Parenthood, and told them to give her their best argument. This is what they told her:  It’s just a clump of cells and if you get it early enough it doesn’t even look like a baby.

Early on a photographer told Ireland she had a voice that could kill small animals.  That was a fork in the road for her.  She had to decide if she was going to let the cruelty of that man’s opinion forever silence her.  Despite that criticism, she chose to speak out on issues of importance and forever be committed to speaking out for the human rights of the unborn.

“I’ve always been the type of person who fights against every type of oppression towards women.  This isn’t a woman’s rights issue; it’s a human rights issue,” Ireland told the Mid-Missouri crowd.  “Don’t let anyone ever silence you on this issue!”

At one point Ireland was going to align herself with a non-profit, but found out they were aligned with a company using fetal tissue in their research.  On a conference call with ten scientists, she asked if any of them had any shred of evidence that the unborn is not a human being.  There was silence.  Finally one of the scientists spoke out and said, “Well Kathy, it’s a little bit more complicated than that.” She replied, “No it’s not.  It’s either a human being or it’s not.  If the unborn is not a human being, then it shouldn’t matter.  No justification is necessary.  If on the other hand the unborn is a human being, no justification is adequate.”  She did not enter into a relationship with that non-profit.

Ireland shared she became pro-choice in high school when a fellow student was volunteering at Planned Parenthood and told her classmates that if they ever got pregnant they could go there and get an abortion without having to tell their parents.

“Let me tell you, in addition to my husband being a commercial fisherman, he’s also an emergency room doctor.  If he gave an aspirin to a minor, he would have his license taken away and could be arrested.  But our children can have a surgery that would kill a human life and forever change theirs and we would never know.  In Missouri you have better laws.  I love my state but that is so messed up.”

“The good news is that doctors, because of better technologies of science and communication, they are understanding life and they are refusing to perform abortions. And our governor is proposing a bill that would allow non-doctors to perform abortions.  In light of the atrocities committed by Kermit Gosnell, it is astounding to me!” the California native stated.

Toward the end of the evening, Ireland shared she has a three-year-old niece who has Downs Syndrome.  “There are people who said she shouldn’t be born,” she noted.  “God doesn’t make mistakes.  My hope is so much bigger than overturning Roe v. Wade, it’s changing hearts.  Something we have on our side is we have the truth.  We have the science.  They have the emotion, but we have the facts.  It’s really hard to argue with that.”