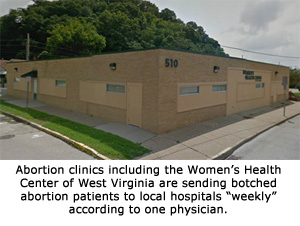 Abortion-related medical emergencies are occurring with alarming frequency, according to a West Virginia physician, who says he sees botched abortion patients “weekly.”

“We commonly (I personally probably at least weekly) see patients at Women and Children’s Hospital in our emergency room or our ultrasound center with complications from abortions at these centers in Charleston: so much for ‘safe and legal.’ These patients are told to come to our hospital because the abortion clinic providers do not have hospital privileges to care for their patients, so we must treat them as emergency ‘drop-ins,’” said Dr. Byron Calhoun, vice chairman of the Obstetrics and Gynecology Department at West Virginia University. The statement was made in a letter he wrote on June 31, 2013, to West Virginia Attorney General Patrick Morrisey.

“No other medical providers are allowed to care for patients, have no backup coverage, and then abandon them to the emergency room,” Calhoun wrote. “We would be held ethically and legally liable.

“The fantasy of women’s reproductive health care seems to allow these individuals who perform the abortions some special dispensation to provide substandard care.”

Attorney General Morrisey is currently reviewing new abortion clinic regulations for West Virginia, but those new safety rules have not yet been approved. Calhoon recommended that West Virginia enact a law that would require abortionists to maintain hospital privileges and that would afford women informed consent prior to an abortion.

“Dr. Calhoun’s experience of seeing botched abortion patients ‘weekly’ is confirmation of our belief that medical emergencies documented outside abortion clinics by pro-life activists are only the tip of a very large and ugly iceberg,” said Troy Newman, President of Operation Rescue. “The abortion cartel does everything they can to conceal and minimize the number of abortion complications and deaths because they understand that if the public knew the truth about how many women are injured by abortion every week, there would be massive public outcry against them.”

Calhoun’s statements echo those of other physicians who have revealed the shocking frequency of medical emergencies that occur at abortion clinics around the nation, and the dangerous way abortion clinics deal with them.

According to a declaration by James C. Anderson, M.D. that was filed in support of a Mississippi law requiring that abortionists maintain hospital privileges, abortion clinic emergency plans frequently involve simply sending women to an emergency room and letting the ER staff figure out what happened and how to fix it.

In West Virginia where Dr. Calhoun practices medicine, four abortion clinics operate with troubled abortionists that have long histories of medical malpractice suits. Currently, the Women’s Health Center of Virginia in Charleston and hired abortionist Rodney Lee Stephens face a lawsuit filed by Alliance Defending Freedom that alleges abortion patient Itai Gravely suffered a horrific incomplete abortion without anesthesia that was forced upon her after she had withdrawn her consent.

Stephens, who holds no hospital privileges, has a history of at least 9 medical malpractice pay-outs that have been reported to the West Virginia Board of Medicine.

“This kind of abortion horror must stop in our nation, and if it takes a state shutting down abortion clinics in order to protect women from abuse, then so be it,” said Newman. “If women’s groups that purport to champion the rights of women really cared about them, they would work tirelessly to close abortion clinics that prey on vulnerable women then subject them to what amounts to little more than quackery.”

Abortion complications that require emergency hospital treatment are occurring at an alarming frequency and pose a safety crisis in America. Resistance by the abortion cartel to safety regulations and oversight only further endangers the lives and health of women and encourages the practices that exploit women for profit and land them in the hospital weekly. It is apparent that close monitoring and safety regulations are imperative to preventing women from suffering serious injury during abortions. The closure of abortion clinics that cannot or will not comply with the standard of care and other laws — which is the vast majority of them — serves the public interest.