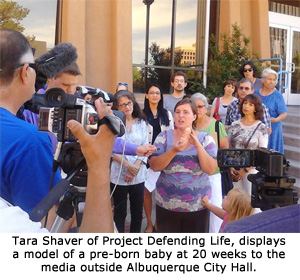 The Albuquerque City Clerk has announced that the Albuquerque Pain Capable Unborn Child Protection Ordinance that was submitted for approval by voters via a city-wide legislative petition will not be on the October 8 ballot because the Clerk’s office has not yet had time to verify enough signatures to trigger a public vote.

Organizers submitted a record 27,000 signatures of Albuquerque registered voters in just 20 days in support of the late-term abortion ban in a community that is the site of the largest late-term abortion clinic in the country. So far the clerk’s office has verified over 9,000 of the 12,000 signatures needed. Once the signatures are verified, a special election will be called. Critics complain that a special election will cost the city “hundreds of thousands of dollars.”

However, Tara Shaver, of Project Defending Life, who is spokesperson for the petition effort, has a solution that will save the city money.

“We are confident it will pass on a special election ballot. However, in order to save the city money we will ask that the City Councilors adopt the ordinance. The people have spoken – 27,000 in 20 days,” said Shaver.

The city council has the authority to adopt the ordinance as they have for other issues that have been submitted via legislative petition. This allows the ordinances to become law without a vote of the people.

The Albuquerque Pain Capable Unborn Child Protection Act, which would ban abortion after 20 week within the city limits, gathered thousands more signatures in less time than other petition efforts that have been directly adopted by the city council citing overwhelming public support.

“It the city wants to be consistent, it will save the taxpayers the cost of a special election by approving this late-term abortion ban since it shows an even wider support among Albuquerque citizens than other measures directly adopted by the council,” said Cheryl Sullenger, Senior Policy Advisor for Operation Rescue. “It’s time for elected representatives on the council to heed the voice of the people.”

Since women from all over the U.S. travel to Albuquerque for late-term abortions, this matter is a national one. We encourage the public to contact the Albuquerque City Council and voice support for the City Council to directly adopt the Pain Capable Unborn Child Protection Ordinance once the required number of signatures are verified.