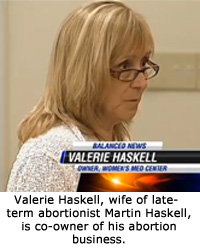 Citing negative impacts on the community by an abortion clinic operated by the notorious late-term abortionist Martin Haskell, the Sharonville, Ohio, Zoning Board of Appeals has denied a request made by Women’s Med Center for permission to place a sign advertizing the abortion business in an area where signs are not allowed.

“We operate a business at this address, and it is impossible to place a visible sign on our lot without a variance,” Mrs. Haskell told the Board. She indicated that a lack of signage has hurt her abortion business.

Board Member Suzy Cole told Mrs. Haskell, “The medical office that you have that performs abortions, it has brought a different essential character to the neighborhood.”

That “different essential character” was defined in a letter submitted to reporters by Dr. Steve Brinn, a pediatrician that operates his medical office for children just 50 feet from Haskell’s abortion clinic.

“This clinic has had a multitude of negative effects on our small community and nearby businesses,” he wrote.

Mrs. Haskell later told reporters that the denial of the variance was discriminatory against the abortion business. Women’s Med Center filed suit in Hamilton County District Court against the Sharonville Zoning Board of Appeals on June 5, 2013, to force the city to allow the otherwise illegal signage.

“The Board’s decision was not discriminatory, but rather was a denial of special privileges to a business that has hurt the community,” said Troy Newman, President of Operation Rescue. “The Haskell’s continue to demand exemptions from the law simply because they operate an abortion business. The only way their clinics can continue operating is through variances, such as the one that exempts Haskell from the requirement that he maintain hospital privileges.”

For years Haskell has operated only with the help of a variance issued by the Ohio Department of Health that allows Haskell to skirt the hospital requirement. He currently has no hospital privileges. Instead, he has an agreement with two physicians – to provide hospital care in the event of a woman suffers a medical emergency at his abortion clinic. At least one physician that Haskell has used in the past had a history of gross negligence and had been ordered to halt the performance of all obstetric procedures.

Operation Rescue has worked for years with local groups to expose abortion abuses at Haskell-run abortion clinics and oppose the ODH variance that allows him to operate outside the law.

Sharonville’s mayor and city health department also oppose Haskell’s abortion business and have petitioned the ODH to terminate his hospital privilege variance, citing that his business poses a danger to the public. A hearing is set for September to reconsider Haskell’s ODH variance.

“It is clear that Haskell’s abortion business cannot comply with the law, so he seeks variances to allow him to continue to sidestep it at the expense of women’s health and the good of the community. His most recent suit regarding his sign is an effort to bully a community that objects to his line of work into complying with his demands,” said Newman. “His ‘above-the-law’ attitude continues to make him a danger to the public.”

Please watch the news video below about the sign dispute.