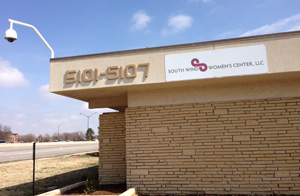 Representatives from Operation Rescue, Kansas Coalition for Life, Kansans for Life, and a local church asked the Wichita City Council this morning to re-zone property where a the South Wind Women’s Center abortion clinic currently operates due to an increased safety hazard created by the clinic.

“Some of the clinic workers are aggressive and harassing toward the pro-life people who are attempting to offer help to abortion-bound women. An escalation of their hostile behavior has every possibility of spilling out into the neighborhood, causing a safety concern to residents along Bleckley,” Cheryl Sullenger, Senior Policy Advisor for Operation Rescue told the council. “An abortion business does not belong in a residential neighborhood.”

Mark Geitzen of the Kansas Coalition for Life indicated that efforts to communicate with the clinic’s security company to alleviate problems have been rebuffed. The residential neighborhood and surrounding community must endure continuous disruptions as a result that pose safety concerns.

Mayor Carl Brewer called on John Schlegel, Director of the Wichita/Sedgwick County Metropolitan Planning Department to clarify whether or not the city council had the authority to rezone the abortion clinic property.

Brewer seemed surprised to learn that the council did indeed have the authority to rezone.

“The process laid out by the Planning Commission is very doable,” said Sullenger. “We are committed to working through the legal process to put an end to the dangers posed by this abortion clinic.”

South Wind Women’s Center opened earlier this year in the same building where late-term abortionist once operated the largest late-term abortion clinic outside Communist China. Tiller’s clinic was closed in 2009.