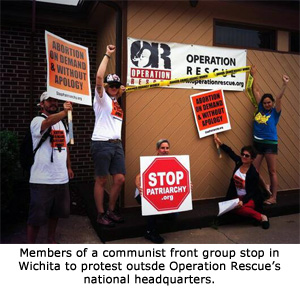 An interesting handful of obviously confused abortion supporters dropped by our office to protest last week. They bussed in from San Francisco (which may partially account for their confusion) under the banner of StopPatriarchy.org. Their website says they support an end to the “enslavement and degradation of women.”

We were contacted by the Wichita police last week, who told us that the group intended to try to present Troy Newman with a “bloody coat-hanger.” Classy.

The gathering of about 15, including just 2 locals, got a two-for one when they arrived at our Wichita headquarters, which is a neighbor to a crisis pregnancy center called “A Better Choice.” If there’s one thing pro-abortion protesters hate more than Operation Rescue, it’s a Christian-operated office that actually renders practical assistance to pregnant women.

The group primarily positioned themselves outside the crisis pregnancy center, stepping across the driveway occasionally to mug for a photo under our banner. While the group purports to support women, their actions ran counter to that claim as they engaged in what amounted to the belittling of women who made the choice to birth their babies and the demeaning of them for seeking help to do so. 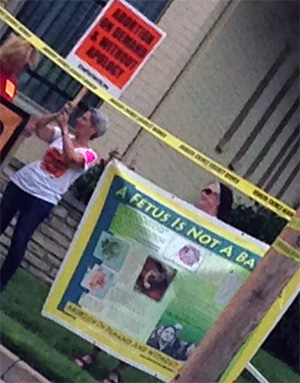 One of their signs bore the slogan “A Fetus is Not a Baby.” While I didn’t get close enough to read the fine print, it seemed apparent that the group attempted to re-define both the term “fetus as well as the term “baby. In fact, “fetus” is the Latin term for “baby.” When a woman is pregnant, we refer to her as “expecting a baby.” If not pregnant with a baby, then what is she pregnant with? Redefining the language is about the only tactic they have to try to convince the public that they are not just a bunch of heartless thugs that are bent on seeing babies die in the most brutal, inhumane way possible.

Science teaches us that at the moment of conception, a new being is created with its own unique DNA and is a separate individual from the mother. It is a human being at the earliest stage of development. Barring sickness or tragedy, that individual will grow, become birthed, and continue its maturation process through the stages of life until, as an elderly person, he or she will pass on from this life. It’s the scientifically proven cycle of life.

But it appeared that our protester friends were not ones to let science interfere with their misanthropy.

Certainly, misanthropy is the appropriate term for their philosophy. They obviously dislike men and children. Their actions show that they aren’t too keen on women who do not abort their “fetuses,” either. In fact, they seemed to hate just about everybody.

That fits in well with the organization that is behind the protests, Revolutionary Communist Party, which is bussing a dozen loyal Communists around the country giving awards to abortion clinic operators, as they did in North Dakota, and lambasting those who truly try to help women and save lives.

For Communists, man exists solely for the purpose of serving the state. It is completely contrary to the Biblical concept — which was adopted by our Founding Fathers – that teaches government should be “of the people, by the people, and for the people.” For the Communists, the State is supreme and man only has value to the extent he can serve it. In contrast, our Constitutional Republic — as it was intended — views the right to live life and pursue happiness through individual responsibility as paramount. The State exists to serve man.

While the protestors say they oppose pornography, rape, and the general the enslavement of women, their philosophy is one that has historically led to massive human rights abuses, such as the bloody purges under Stalin, Mao, Pol Pot, and others, that cost the lives of millions – including women and children – followed by large-scale repression of freedoms. Under Communism, all life is degraded to that of a commodity and the State decides who lives and who dies.

People like the Stop Patriarchy protesters probably think that would never happen to them, but once one person’s life is devalued, it devalues the lives of all and even the most ardent supporters of such a misanthropic world view are not immune from becoming victimized by it.

Unfortunately, their view of life being subservient to the State has taken foothold in America. In many cases, abortionists are immune from compliance with health and safety laws. Government-run Obamacare decides who gets certain kinds of health care and who fatally does not. Life-saving treatments are rationed, yet all are forced to pay for others’ birth control and abortion.

This anti-life philosophy must be opposed if we are to maintain any resemblance to the America that was intended by the Founding Fathers, where life and liberty were valued and protected.

We pray our misguided protesters will come to understand the truth, renounce their hatred for humanity, and join us in the fight for life.