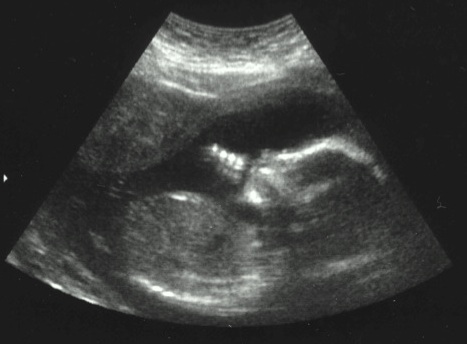 A couple definitions from the media’s unofficial abortion lexicon:

Baby (n) any infant, pre- or postnatal, whose existence is welcome and not seen as “punishment” for the mother. Often used to gush over celebrity offspring. Example: “The world is impatiently waiting for the Duchess of Cambridge, Kate Middleton, to give birth the baby that will be heir to the British throne.”

Fetus (n) any prenatal infant whose existence causes the mother complications, health-risks, or inconveniences. Often used to describe the disposable byproduct of the abortion procedure. Example: “Texas State Senator Wendy Davis is a media hero for defending a woman’s right to abort her fetus up to 26 weeks into the pregnancy.”

When they’re not outright censoring the culture of life in America, the media play games with language to make their points. Journalists use language to denote a difference between life and death: a baby that’s wanted and a fetus that’s doomed or unwanted. One is a blessing, the other a problematic “clump of cells”

From the end of June 2010 to June 2013, the networks dehumanized unborn children by using the word “fetus” in nearly half – 45 percent – of reports in connection with death. In relation to either problems and risks or medical issues, “fetus” appeared in 93 percent of reports.

In the past year, the separation has been clear. The term “fetus” disappeared in positive situations, such as where anchors describe women as “pregnant with” children and babies – never fetuses.

In media-speak, the three networks pounded the word “fetus” into reports about death – most commonly abortion. ABC’s Jonathan Karl noted a similar law in Texas during “World News with Diane Sawyer” on Aug. 30, 2011, saying Gov. Rick Perry received “new scrutiny” for a law that said “if you want an abortion, you must first listen to the fetus’ heartbeat.” Even in a delicate case where the mother’s life was threatened, a Catholic hospital agreed to an abortion or, “saving the mother’s life, losing the fetus,” according to CBS’ Barry Petersen during “CBS News Sunday Morning” on Dec. 4, 2011.

The trend continued with Natalie Morales who, on NBC’s “Today,” Aug, 10, 2011, refrained from the word “baby” – which the World English dictionary calls synonymous with fetus – while citing pro-life unease about unborn babies’ testing results: “But some are concerned that parents may abort the fetus.” On the Dec. 6, 2011 “The Early Show,” CBS’ Cynthia Bowers explained that Mississippi refused to “declare a fetus a person.” Of course, refusing to call a “baby” a person just wouldn’t make sense.

Charlie Rose broke the media-speak rules after CBS’s Erica Hill spoke of a test to determine the “genetic code of a fetus.” Rose used “baby,” during “This Morning” on June 8, 2012, saying the test could discover “more than 3,000 genetic disorders before a baby is born” – and went on to address the situation where parents “may elect to abort.” NBC’s Savannah Guthrie reported on the story that day, but was more careful with her phrasing. She asked Dr. Nancy Snyderman “What would you learn about the fetus?” on “Today.” Snyderman responded that this “science of today” allowed “parents a chance to decide whether they’re going to continue that pregnancy or not.”

“Fetus” isn’t just for abortion though. During “Nightly News” on Nov. 14, 2012, NBC correspondent Jim Maceda told of a woman who begged for an abortion – and later miscarried and died from blood poisoning – because “the fetus still had a heartbeat.” NBC especially linked miscarriages with the fetus terminology, and, during “Today” on Dec. 9, 2011, Dr. Rebecca Brightman explained that when a woman miscarries, it can be due to “something chromosomally wrong with that fetus.”

On a smaller scale, medical concerns surfaced left and right in fetus language as Dr. Jennifer Ashton, ABC News Senior Medical Contributor, explained, on ABC during May 10’s “Good Morning America,” that with Picotin, a labor inducing drug, threats “extend not just to the mother, but also to the fetus.” In a similar situation, CBS’s Rebecca Jarvis asked on the March 2 “This Morning,” about BPA exposure, “How about pregnant women? Are they passing it down to the fetus?”

Even when talking about the health of wanted prenatal babies, the networks were careful to refer to them only in close, sterile language – doctors and experts included. On NBC “Today,” July 28, 2011, Ann Curry asked, “Biggest risk of gaining too little [weight] while pregnant?” Dr. Nancy Snyderman responded “Well, you starve your fetus.” On “Today” February 10, 2011, Robert Bazell, former chief science and health correspondent for NBC, described how “doctors operate on the fetus in the womb” with birth defect spina bifida and the day before on “Nightly News” noted how “doctors cut into the womb and fixed the fetus’ spine.”

Even with celebrities, “fetus” translated to complications. On “Today” for January 1, Dr. Snyderman told Savannah Guthrie, when explaining Kate Middleton’s pregnancy threat, “you worry about risk to the fetus, risk of premature miscarriage.”

Usually, when speaking of pregnant celebrities this year, the networks provided a stark contrast in language. During “Good Morning America” on April 12, ABC’s Paula Faris gushed that Kim Kardashian and boyfriend Kanye West “were expecting their first child.” Even Kathie Lee Gifford named Kardashian’s unborn a “child” during NBC’s “Today,” on January 15, while Hoda Kotb used “baby” on January 2. Even with Kate Middleton, Brian Williams described her as “with child” on NBC’s “Nightly News” for February 19.

Even though the networks didn’t change the fetus language of death for complications and abortion – just for the big names’ highly anticipated, wanted, babies – they ironically dropped hints on the importance of unborn life. Reports, such as “Good Morning America” on September 27, 2010, warned of risks, such as drinking. Lori Gertz, who adopted a child diagnosed with alcohol spectrum disorder, told ABC’s George Stephanopoulos that “alcohol crosses the placenta, and the fetus does have the ability to metabolize it,” creating “brain damage.”

There was also Savannah Guthrie, during NBC’s “Today” on May 10 ironically alluded that fetuses could be murdered: “this potential of aggravated murder charges presumably for the unborn fetus or fetuses of Michelle Knight,” one of three women kidnapped in Ohio and found earlier this year. NBC news justice correspondent Pete Williams also admitted life on March 7, during “Nightly News” when citing the sponsor of an Arkansas law and said, “12 weeks is when a fetus has a measurable heartbeat, the sign of life.”

Not to be left out, CBS “This Morning” on December 8, 2012, featured Dr. Daniel Levitin explaining the stimulus music from outside the womb provides to the unborn. “The fetus has a fully functional auditory system by the age of twenty weeks,” said Levitan.

The language inclination hasn’t been without critics. Meredith Jessup, from conservative site The Blaze, credited Planned Parenthood and other abortion supporters on Yahoo News for the dehumanization in the “baby” versus “fetus” terminology. Pro-life blogger Jill Stanek also called out the media for using “fetus” when describing the deaths of born babies, which, she insisted, “ is absolutely linguistically incorrect, although, of course, politically correct, which is more important to so many of them.”

Another Blaze reporter questioned the use of “fetus” during the Kermit Gosnell trial by the New York Times. First Things, a publication by The Institute on Religion and Public Life which exists to “advance a religiously informed public philosophy for the ordering of society,” called the tactic, implemented by both the Times and AP, “straightforward medical inaccuracies” that “conceal a moral lie.” “To call a baby, born or unborn, a ‘fetus,’” First Things explained, “is a way of distancing ourselves from its humanity by means of medical terminology.”

Negatively charged and biased language also permeated the three networks before when reporting on life – if reported on at all. But behind every charge there’s an illuminating spark, as a shift in language betrays a censorship of life.