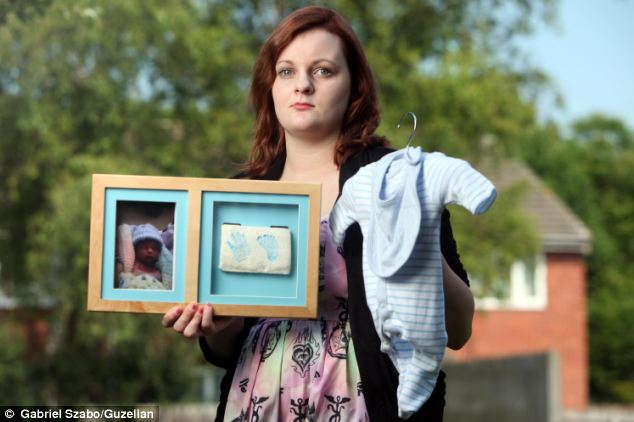 Carrie Curtis received suggestions from her doctor to have an abortion of her disabled son, who was diagnosed with Potter’s Syndrome. That is a condition which prevents the child’s kidneys from developing properly and is typically fatal for the baby.

In Potter’s syndrome, the unborn baby has an atypical physical appe

arance as the result of oligohydramnios, a decrease in amniotic fluid volume that causes developmental problems and babies with Potter’s Syndrome typically die within a couple days of being born.

Because of the condition, Curtis was urged every two weeks to have an abortion, but she refused and eventually gave birth at 32 weeks to Charlie, who weighed four pounds. Charlie died 19 minutes later and Carrie spent three days with him in the hospital.

Now, she is raising money for a new charity, called Charlie’s Angels, to raise funds for parents who lose a baby shortly after birth.

More on Curtis’ courageous story from the London Daily Mail:

A mother who chose to give birth to her baby despite being advised to abort him every fortnight throughout her pregnancy, sat beside his body for three days after he died just 19 minutes old.

The baby, who was named Charlie, suffered with Potter’s Syndrome, a rare condition that affects the growth of the kidneys.

Doctors spotted the syndrome when expectant mother Carrie was 18-weeks pregnant, but she chose not to terminate her son’s life as he was otherwise developing normally and had a very strong heartbeat.

Miss Curtis, 20, said: ‘I wanted to give Charlie the best chance I life that I could.

‘I knew the chances of him surviving were almost nil but as long as he had a heartbeat, I wasn’t going to change my mind – no matter how many times doctors asked me if I was sure.

‘I went for fortnightly checks and each time they asked if I wanted to terminate my pregnancy. They wouldn’t listen [to me].’

Even if this problem is treated the baby cannot survive without kidneys.

During her pregnancy, Miss Curtis prepared herself for the worst but when she gave birth to him on December 29 last year, in her 32nd week of pregnancy, she said he looked like any other newborn baby, despite weighing just 4lb.

Miss Curtis, from Leeds, said: ‘It was a normal birth and I had a big team of people looking after me.

‘As soon as he came out, he was taken over to an incubator where they tried to work. But his lungs were nearly non-existent and there was nothing they could do.

He passed away at 19 minutes.

‘They wrapped him in a towel and let me hold him while he slipped away.

‘Charlie opened his eyes and looked at me, which will forever be a lasting moment for me,’Miss Curtis added.