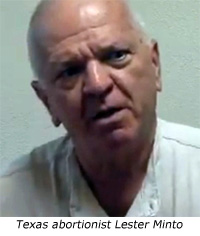 Abortionist Lester Minto defiantly vowed earlier this month never to stop doing abortions, but this week he announced that he would close his abortion clinic, Reproductive Services in Harlingen, Texas, within the next 90 days. The abortion business has done 1,500-2,000 abortions yearly.

Minto, who called the Texas abortion law “an insult to women’s intelligence,” told the New York Times he would keep doing abortions “whether that means under the cover of a mesquite tree or on a shrimp boat or going to Mexico” where abortions are also illegal.

Waving a speculum at a pro-abortion rally, Minto told the crowd that the government “can’t take my gun and can’t take my speculum….You’re going to have to pry it from my cold, dead hand.”

Minto has a history of previous discipline by the Texas Medical Board.

“Maybe Minto’s threats to continue abortions illegally were just bravado, or maybe he just decided to wise up. In any case, we hope the Texas authorities keep an eye on him to make sure he doesn’t make good on this threats to endanger the lives of women with illegal abortions,” said Troy Newman, President of Operation Rescue.

Minto’s abortion clinic closure is one of several already announced after Texas passed a sweeping bill bans abortions after 20 weeks gestation, raises standards on the use of the abortion pill, and puts in place safety regulations on abortion clinics, which previously were allowed to operate under dangerous conditions.

Almost immediately after the signing of the law, Planned Parenthood announced the closure of three of its Texas locations. Later, Whole Women’s Health said it would close four out of five of its locations, including its troubled clinic in McAllen, which was fined $13,475 in 2011 for illegal disposal of medical waste, including recognizable human remains, in an open dumpster.

“Women are going to be much better off without shoddy abortion clinics preying on them in a time of vulnerability and subjecting them to substandard conditions,” said Newman. “We have found that when abortion clinics close, the vast majority of women find more positive ways of dealing with the challenges of life than taking the lives of their babies. Unlike abortion, saving their babies lives is a decision they never regret.”