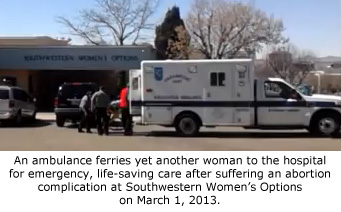 A unique attempt at banning late-term abortions through the petition process at the city level is close to reaching its goal of 12,000 signatures in Albuquerque, New Mexico, a city that is now known as the Late-term Abortion Capital of the U.S.

The effort, spearheaded by Bud and Tara Shaver of Project Defending Life, has already submitted over 11,000 signatures, just 1,000 shy of those needed by July 25 to place the initiative on the ballot in October. If successful, Albuquerque would become the first city in America to ban abortions after 20 weeks gestation.

“These late term abortions are very risky for women,” petition organizer Tara Shaver said. “So ultimately we see women and their children will be protected as a result of this initiative.”

Shaver documented the risks to the latest of abortion procedures employed by an Albuquerque abortion clinic, Southwestern Women’s Options, when she obtained over a dozen 911 calls for abortion-related medical emergencies through open records requests until the city finally stopped honoring her requests. Operation Rescue helped Project Defending Life publicize the incidents that revealed live-threatening complications from abortions as late into pregnancies as 35 weeks. A pregnancy is considered full term at 38 weeks.

Shaver expresses concern that Texas’ new law banning abortions after 20 weeks signed yesterday by Gov. Rick Perry will only drive more women to Albuquerque where women are subjected to risky late-term abortions in a clinic setting using a process that often ends in women delivering babies into hotel toilets and even being born alive.

“Because we have no restric

tions on abortion, we already don’t have anything that’s keeping women from coming to our state,” said Shaver. “Every week we see women coming from all across the country specifically for late-term abortions.”

“Opponents of the petition effort cast late-term abortions as a human right, however that argument is specious,” said Cheryl Sullenger, Senior Policy Advisor for Operation Rescue, which frequently works with Project Defending Life to expose abortion abuses. “Certainly twisting heads off viable babies and subjecting women to dangerous procedures that fail to meet obstetrical standards in clinics that are not equipped to handle life-threatening medical emergencies is the real human rights issue. Late-term abortion is a barbaric, torturous process that has no place in a civilized society.”

Operation Rescue’s Troy Newman and Cheryl Sullenger will join Project Defending Life and the Survivors in Albuquerque on August 2-4 and participate in a free training program to equip pro-life supporters for the work ahead.

Learn more about the petition