It was a beautifully clear picture-postcard summer day in Chicago when Tonya Reaves left her one-year old son for an appointment at a Planned Parenthood abortion clinic, but that sunny Friday morning of July 20, 2012, would be the 24-year old woman’s last day on Earth.

Planned Parenthood staff allowed Reaves to languish at the clinic after having botched her abortion while she hemorrhaged for 5½ long hours before seeking emergency care. Records show that Planned Parenthood did not call 911 for an ambulance, which was the quickest way to get help for her.

It is the official opinion of the Cook County Medical Examiner that Reaves’ cause of death “is due to hemorrhage resulting from cervical dilation and evacuation due to an intrauterine pregnancy.” In plain language, Reaves bled to death as the result of a bungled D&E abortion.

Yet one year later, there has been no justice for Tonya. 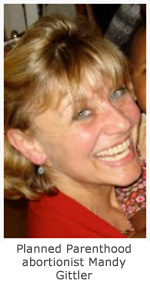 While the nation rages over the supposed “injustice” of the acquittal of George Zimmerman, a Hispanic man, in the shooting death of Trayvon Martin, a Black teen, there has been no mention in the national press about Tonya’s brutal death at the hands of Planned Parenthood, even though Tonya was also an African-American whose life was ended by a blonde white abortionist named Mandy Gittler.

In fact, while Pres. Barack Obama was quick to jump in to the Trayvon Martin fray, noting that if he had a son, he’d look like Trayvon, Obama disrespected Tonya and her grieving family with comments in support of Planned Parenthood made during a campaign speech in Portland just days after her death.

Obama accused his political opponent of wanting to “get rid of funding for Planned Parenthood. I think that’s a bad idea.” Obama continued, “I’ve got two daughters. I want them to control their own health care choices.”

We have to wonder how Mr. Obama would have felt if that had been Malia or Sasha bleeding to death on that abortion table. Maybe if he had been as concerned for the life of a poor black woman in his own adopted home town as he was for Trayvon Martin, maybe other women who have died from abortion complications in the months since Tonya’s tragic passing, such as Jennifer Morbelli and Maria Santiago, would still be alive today.

Instead, Tonya Reaves is all but forgotten. Those responsible for her fatal injuries and those who stood idly by for hours as her life ebbed away inside that Planned Parenthood office – one not even equipped to handle anything beyond dispensing birth control pills – have not been held to account.

Maybe that’s because Planned Parenthood was an avid campaign supporter of Obama’s during his re-election campaign. Maybe it was because Tonya was simply just another poor urban woman of color, a member of a class of women who have been specifically targeted for abortion in this nation.

Whatever the case, a woman is dead and she deserved better than to have had her young life unnecessarily snuffed by the politically powerful Planned Parenthood only to have her death swept under the rug. It is an injustice that must not be allowed to stand.

For the rest of July, we ask you to join Operation Rescue and national black pro-life leaders, including Dr. Alveda King, niece of slain civil rights leader Dr. Martin Luther King, Jr., in tweeting #Justice4Tonya to draw attention to the anniversary of the abortion related death of Tonya Reaves.