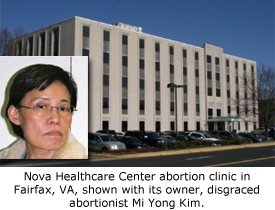 The Washington Post reported Sunday on the closure of Nova Women’s Health Center in Fairfax, Virginia, which was the busiest abortion clinic in Virginia. Since then, there have been numerous news stories concerning the news, most of which bemoan the notion that new clinic regulations forced this abortion clinic out of business.

But in fact, abortion clinic regulations had little to do with the closure of Nova

Women’s Healthcare. The truth is that it closed because of its own shoddy treatment of women and failure to pay back rent that caused Nova’s landlord to terminate their lease amid revelations that women were being injured and mistreated there.

Abortion supporters are attempting to falsely use the clinic’s closure to disparage the new regulations, which would require abortion clinics to meet minimum safety standards, remarkably, something abortion businesses adamantly oppose.

Alena Yarmosky, a spokeswoman for NARAL Pro-Choice Virginia, told the Washington Post that NOVA “was trying to relocate because they couldn’t stay where they were, because of the new regulations. . . . The fact they were forced to move, that’s a testament to the barriers these providers face.” (Emphasis added.)

That statement is simply not true.

One court document stated the following indicated that that other tenants had to endure abortion protests along with “patients and visitors of [Nova] loitering in hallways, individuals vomiting in the bathrooms or common areas in and around the building, and female visitors carried from the building in an apparent state of unconscious…This is the reality created by NOVA.”

In fact, Operation Rescue worked with local activists to document medical emergencies at Nova and filed a complaint against Kim, who continued to operate the abortion business even though she had her own medical license revoked in 2007 after killing a patient during an abortion.

Since then, Mi Yong Kim transferred ownership of Nova to Taehyun Kim, an apparent family member, and settled the 2011 suit with the landlord. However, in April, Eaton Place Associates, LLC again sued Nova, this time for $95,000 in back rent that the abortion business had failed to pay. In June, Nova agreed to remit the money and vacate the Eaton Place location.

Nova attempted to relocate to a building on Main Street but was denied a building permit because it lacked number of parking spaces required by zoning ordinances.

Then, in a dishonest move to circumvent the ordinances, Nova reclassified itself as a “Health Spa” and reapplied for the permits. Seeing through the rouse, the City Manager again denied their permit application.

After pro-life supporters recently turned out in droves at a city council meeting to oppose permits for Nova, the Fairfax City officials amended the zoning ordinance, changing the definition of a clinic from a doctor’s office to a “medical care facility,” which required a special use permit. This will protect the people of the city from further nuisance caused by abortion businesses. It is unknown if Nova will ever be able to relocate, but for now, it is thankfully closed.

Certainly, if Nova had remained on Eaton Place, the clinic could not have complied with new minimum safety standards, but that is not why the abortion business actually closed. However, the new safety requirements will in fact protect women from substandard clinics like Nova, which is a benefit that everyone who truly cares about women should appreciate.

In reality, the Nova abortion business was a shoddy operation that left women vomiting in common areas on a daily basis according to court records, and having to be carried out unconscious, rushed to emergency rooms, and even landing one woman in the morgue.

To compound the troubles, Nova was a deadbeat tenant that created a nuisance, endangered women, ran off other tenants then refused to pay their rent.

These are inconvenient truths for the abortion cartel, which would rather deceive the public into thinking that clinic regulations hurt women when it was in fact the abortion clinic that was harming and abusing women on a daily basis, according to court records. The abortion cartel is desperate to vilify clinic safety standards because they know they simply cannot stand up under the scrutiny. For them, profits come first with women’s safety a distant second.